Today’s press conference on World Wildlife Day, in cooperation with the United Nations Office on Drugs and Crime (UNODC), the Austrian Federal Ministry of Finance and the Zoo Schönbrunn, aimed to raise awareness of the serious consequences that wildlife and forest crime and crimes in the fisheries sector have on the world’s biodiversity and climate, and peoples’ livelihoods.
Each year, while countless species are driven closer to extinction, criminals make billions from the sale of protected wildlife and wildlife products. Not only do these crimes have a significant impact on biodiversity, they also undermine national and regional political and economic security, weaken the rule of law, threaten global health, and hinder efforts to responsibly and sustainably manage natural resources in the service of development for all. Wildlife crime is a business that is global, lucrative – with high demand driving high prices – and extremely widespread. Nearly 6,000 different species of fauna and flora have been seized between 1999 and 2018 globally, with nearly every country in the world playing a role in the illicit wildlife trade.

The 2022 World Wildlife Day, on 3 March, is marked with the theme of “Recovering key species for ecosystem restoration”. It reminds us of the need to reset our relationship with nature and to address the greatest threats to our biodiversity.

The press conference took place at the Natural History Museum (NHM) Vienna. In her introductory remarks, Dr. Katrin Vohland, Director General and Scientific Director of the Natural History Museum Vienna, emphasized: “Natural history museums can contribute to the fight against wildlife crime. Thanks to the expertise of the scientists, species determinations can be made for use by customs, for example.”

The illegal trade in wild fauna and flora is a significant driver of global biodiversity loss. The illegal trade in protected animal and plant species (or the products derived from them) ranked among the most profitable illegal industries worldwide, with a turnover of several billion euros per year. In recent years, however, its extent has multiplied drastically. The consequences for biodiversity, national and international economies and our health, as the current COVID-19 pandemic shows, are far-reaching.

Combating this illegal trade is a central point in the EU Biodiversity Strategy 2030. The Washington Convention on International Trade in Endangered Species of Wild Fauna and Flora (CITES) regulates trade in strictly protected animal and plant species. More than 35,000 endangered species are listed that are subject to trade restrictions. But all too often, trade restrictions can be circumvented. In Austria, too, violations of the CITES Convention occur every year, through trade of souvenirs, traditional medicinal products, fashion and household items, or pets being brought into Austria illegally or in contravention of the Convention.

NHM Vienna has been working in the fields of wildlife monitoring, molecular systematics, wildlife forensics, phylogeography and biodiversity research for years. Housing more than 30 million objects, the NHM also has internationally relevant zoological and botanical collections that can be used to create reference databases for the fight against wildlife crime. As one of the largest non-university research institutions in Austria, NHM Vienna has a leading role in the field of preventing wildlife crime and actively cooperates with the United Nations Office on Drugs and Crime (UNODC), the Austrian Customs Office (Federal Ministry of Finance) and the Zoo Schönbrunn, and prepares expert reports on confiscated products, among other relevant documentation and research.

Alan Cole, UNODC Border Control Lead, reiterates that “Wildlife crime is serious organized crime. It is often linked to corruption and economic crimes and can threaten the rule of law, governance and national security. At UNODC, we provide capacity building and technical assistance to Member States around the world, to prevent, detect, investigate, prosecute and adjudicate wildlife crime. We support authorities from the scene of the crime to the courtroom to hold organized criminal groups exploiting our natural resources accountable.”

“Customs is the central enforcement authority in Austria when it comes to species protection issues. With this important task, customs significantly contributes to the preservation of endangered animal and plant species. The experience and professionalism of customs officers, combined with technical equipment such as scanners and customs sniffer dogs, ensure successful customs controls that combat wildlife trafficking,” said Gerhard Marosi, expert for product piracy and species protection, Federal Ministry of Finance, Austria.

Anton Weissenbacher, Zoological Department Head of Zoo Schönbrunn, Vienna, remarked: “The main expertise of Vienna Zoo is to maintain and breed threatened and rare species. We are among very few European zoos to keep Giant Pandas and have become famous for successfully breeding them. But we also have a very strong focus on threatened fish, amphibians and reptiles. Many of these species were bred the first time in captivity at Vienna Zoo – such as the Northern River Terrapin, Batagur baska, listed as the 3rd rarest turtle in the world. Concerning the fight against wildlife crime, Vienna Zoo has been cooperating with the responsible authorities for many years. We help train wildlife detector dogs to sniff out smuggled live animals and stop wildlife traffickers that arrive at Vienna Airport. We usually become involved in a very early stage of the confiscation of live animals. Over the years, our team has gained profound competence in providing first aid as well as long-term care to various kinds of confiscated reptiles. In many cases, we have even been able to build up ex-situ populations from smuggled specimens – the essential basis for successful ex-situ conservation projects.”

“There are currently around 12,000 species of reptiles. A large number are listed on the IUCN Redlist. Above all, habitat destruction and, secondarily, active persecution by humans are leading to species extinction,” says Dr. Silke Schweiger of the 1st Zoological Department, Herpetological Collection at the Natural History Museum Vienna.

Wildlife crime is covered in detail in NHM Vienna's exhibitions, for example in the form of a species protection showcase in hall 27 or impressive pictures in the rhinoceros showcase (hall 35). In addition, NHM offers a platform for knowledge transfer and public relations through lectures, radio interviews and films on the subject of wildlife crime, sensitising citizens to the subject.

Internationally, NHM Vienna also cooperates with the LOEWE Centre for Translational Biodiversity Genomics at the Senckenberg Institute in Frankfurt, and with the FOGS Forensic genetics for species protection at the Zoological Research Museum Alexander Koenig in Bonn, for the provision of tissue samples of endangered species. 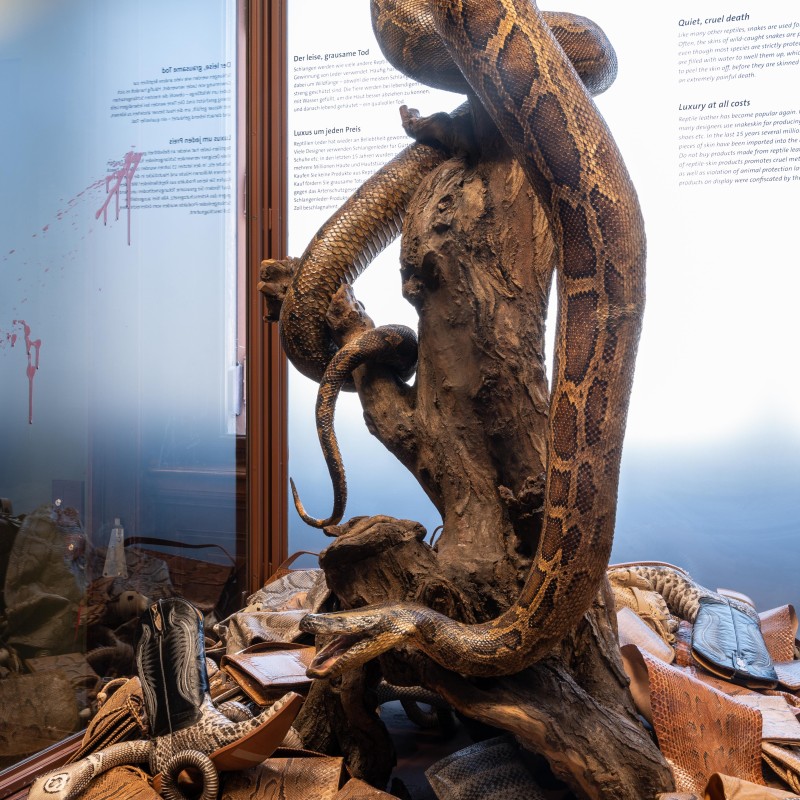 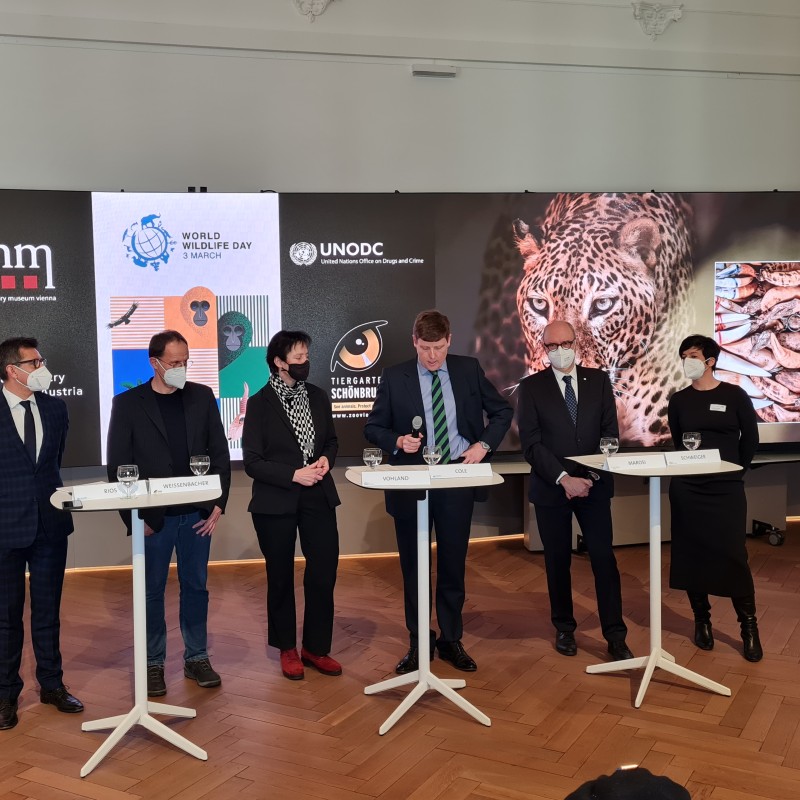 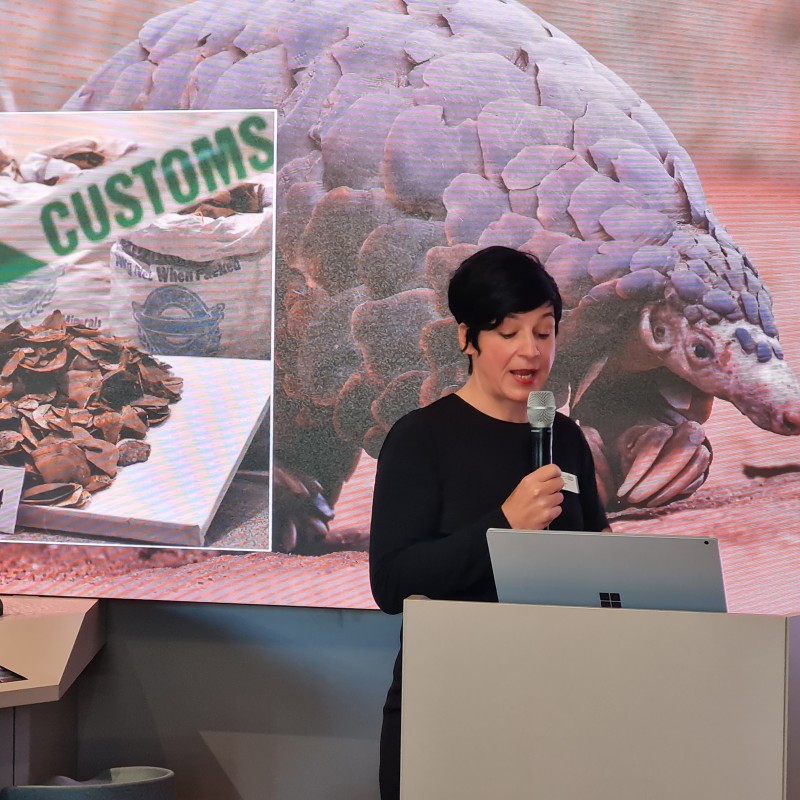 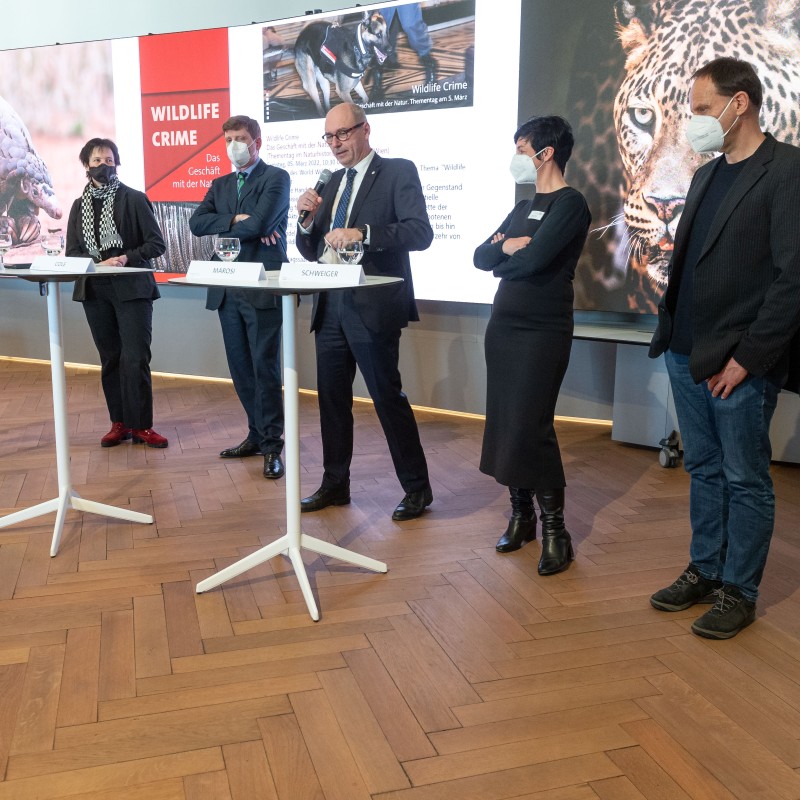 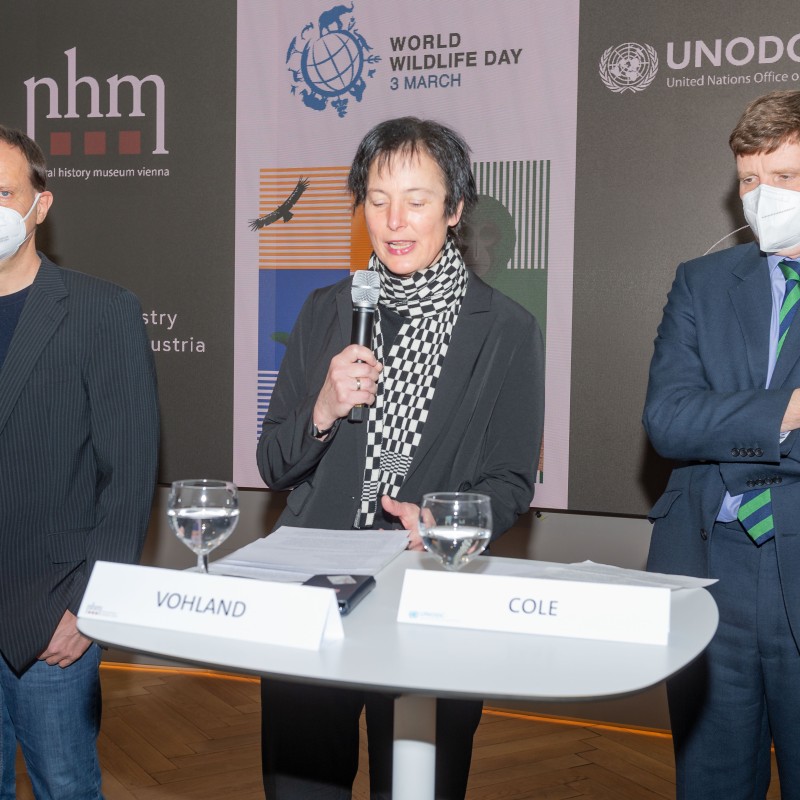