From a historical point of view, the scanning electron microscope (SEM) and the electron probe micro analyzer (EPMA), also known as electron microprobe (EMP), evolved separately. However, they are in fact very similar and differ mainly in the way they are utilized. At the NHM the EPMA is used mainly for high precision WDS measurements and high resolution imagining at high magnification, whereas the SEM is mainly used for imaging at moderate magnifications and quick EDS measurements.

In both instruments, the surface area to be examined, or the micro volume to be analyzed, is irradiated with a finely focused electron beam. The electrons of the primary beam stimulate the sample to emit different types of electrons and photons that can be collected by various detectors and used to image the sample surface as well as to perform chemical analysis.

Specimen – electron beam interaction
When a beam of accelerated electrons is focused on the surface of a specimen, strong elastic and inelastic scattering interactions occur between high energetic free electrons and the atoms of the sample. As a result, several types of electrons and photons are produced, the ones used in our labs are displayed in the following figure. 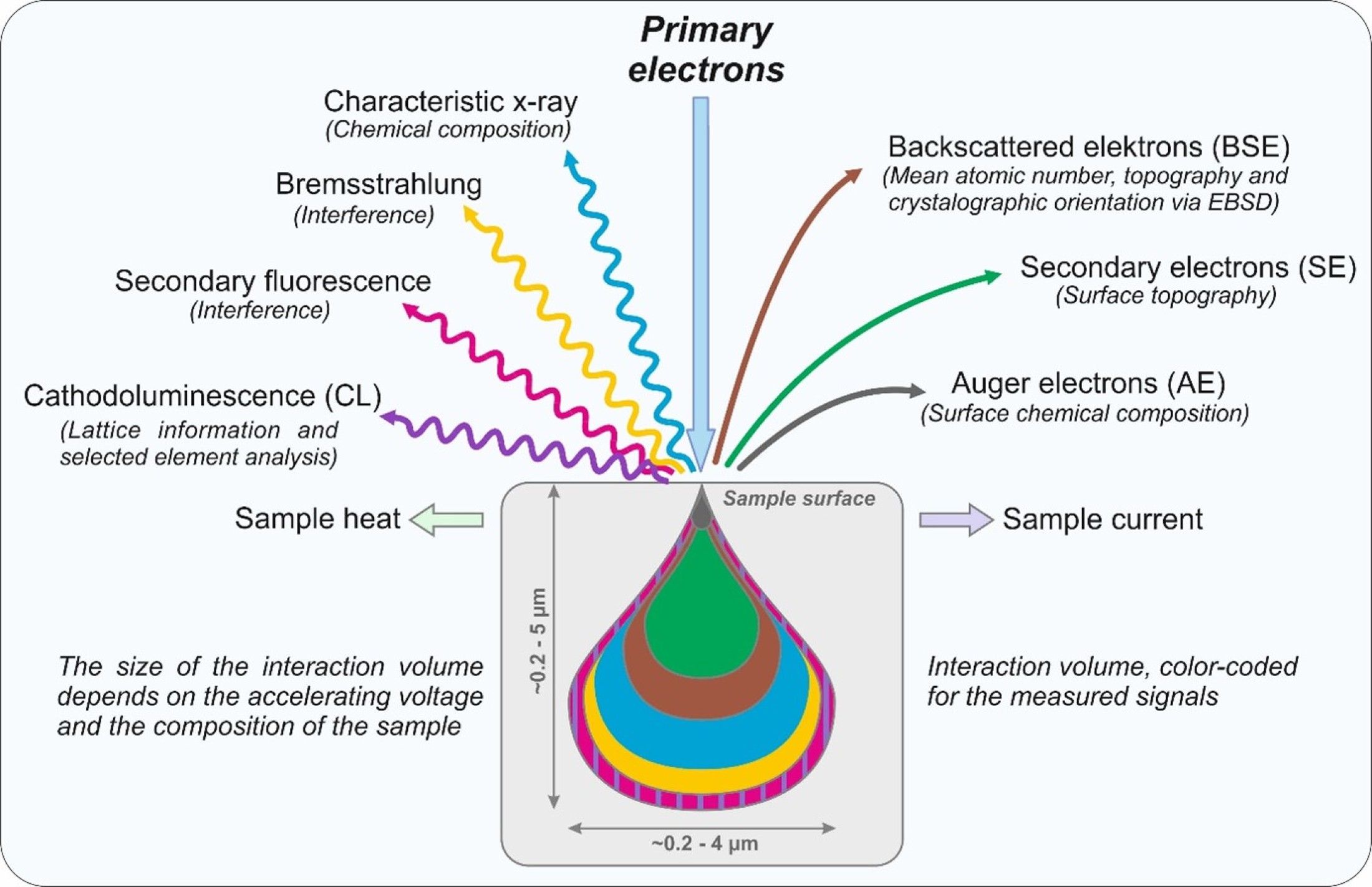 Secondary (SE) and Auger (AE) electrons are of low energy carrying information about topography and chemistry of the first several tens to thousands atomic layers of the sample. Backscattered electrons (BSE) are elastic scattered high-energy particles, providing information about the mean atomic number of the sampled volume. Additionally, these electrons can be used for electron backscatter diffraction (EBSD) to evaluate the crystallographic orientation of different phases. Two different types of X- rays are produced in the sample, the low energy characteristic X-ray and the high energy Bremsstrahlung. The characteristic X-ray provides information about the chemical composition of the analyzed volume. In addition to the different types of electrons and X-rays light is emitted from the sample. The so-called Cathodoluminescence (CL) is used do get structural information of the phases.
These electrons and photons are produced in specific excitation and escaping volumes in the sample. The size of the volume is a function of the energy of incoming electrons (the higher the energy, the larger the volume) and the density of the sample (the higher the density, the smaller the volume).

X-ray generation
Characteristic X-ray generation in a sample is based on excitation of atoms. In EPMA and SEM systems, this is realized by bombardment with electrons. An electron is knocked out of one of the inner shells of the atom. Such a state is unstable and the resulting 'gap' is immediately filled by a higher-energy electron from an outer shell. 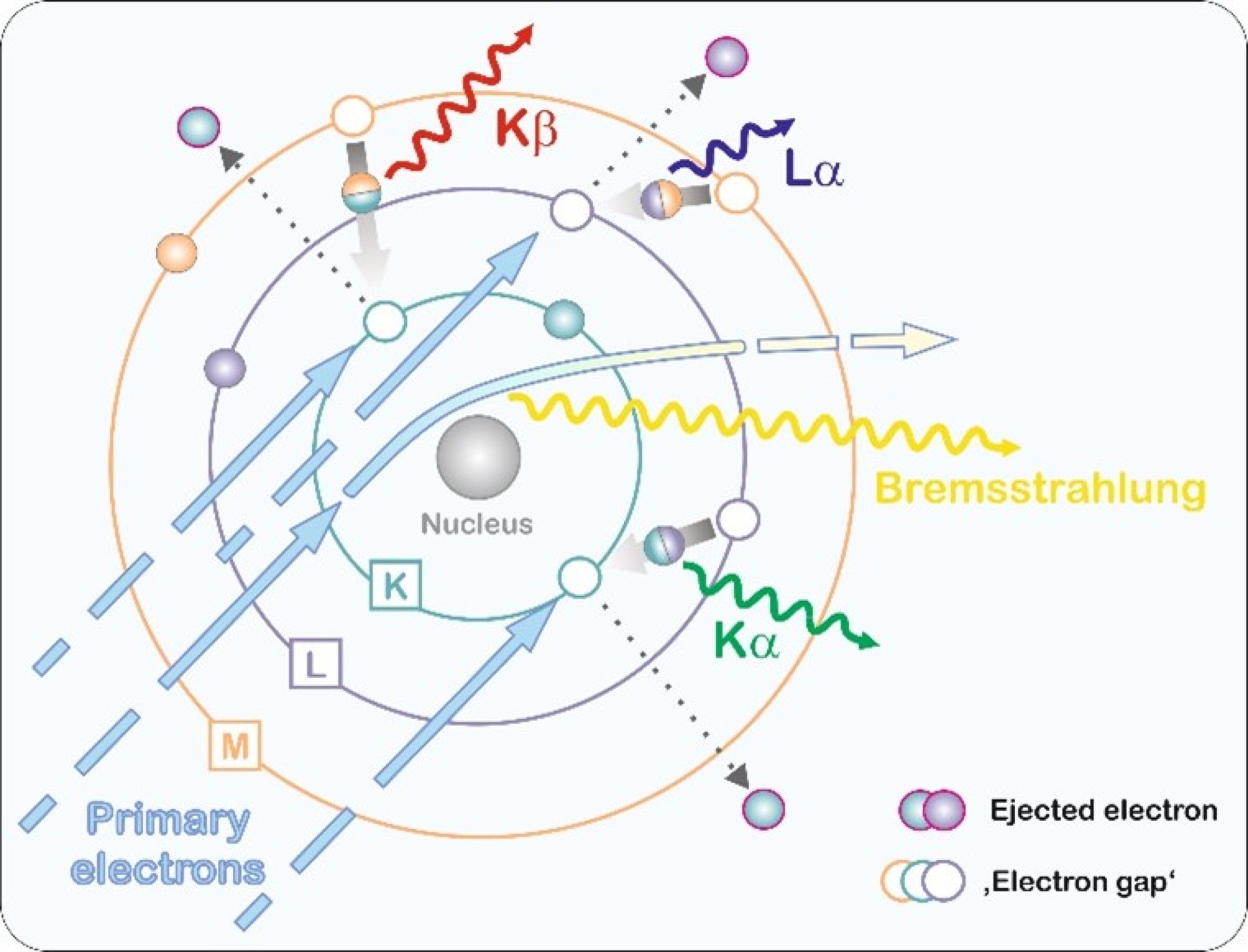 The energy difference is released by an X-ray quantum. The resulting X-ray radiation is characteristic of the respective transition and the atom, i.e. the element.

During the bombardment, different transitions are possible, depending on the shell from which the higher-energy electron is released and the shell in which the 'gap' is to be filled. This creates X-ray quanta, which are designated Kα, Kβ, Lα etc. The energy of an X-ray line (position of the line in the spectrum) is the indicator for element identification. The 'intensity' of the line depends on the concentration of the element within the sample.
However approximately 80% of the population of X-rays consists of X-rays generated by a different process. Bremsstrahlung is generated when an electron passes near the nucleus is slowed and its path is deflected. The energy lost is emitted as a bremsstrahlung X-ray photon. Depending on how close a primary electron passes an atomic nucleus of the sample material, it is deflected and braked to different degrees. It follows, that the energy levels of the bremsstrahlung can assume all values up to a maximum value, i.e. the spectrum of the bremsstrahlung is continuous.
Bremsstrahlung does not contain any useful information and limits the minimum detectable amount of an element.  In addition, it can create problems in determining the backgrounds for characteristic X-ray peaks (nonlinearity). 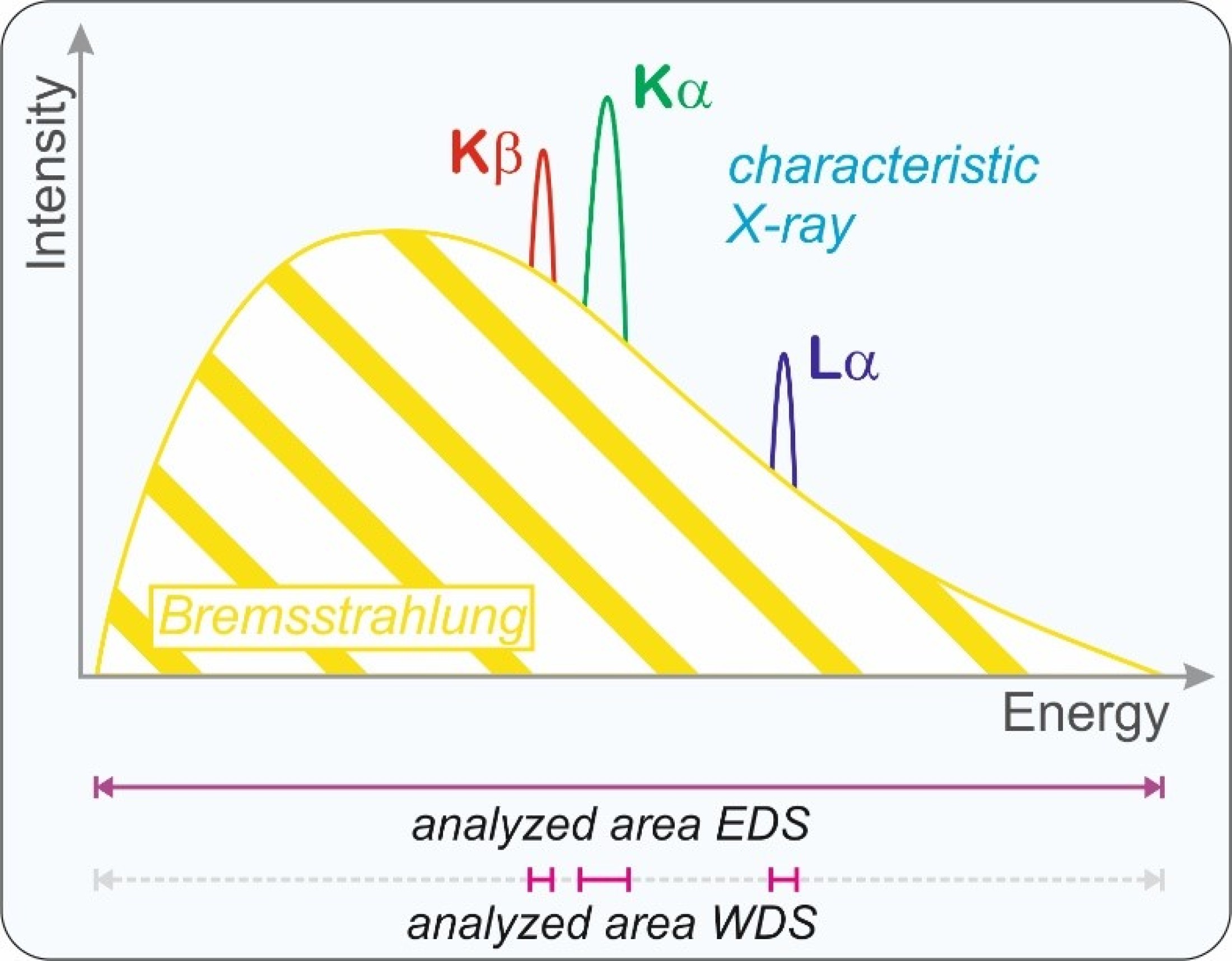