This collection was set up in the Imperial Palace (Hofburg) according to the scientific categorization established by Baillou himself, who remained in charge of the collection for several years after its acquisition by Franz I. It mainly comprised minerals and fossils as well as snail shells, mussels, and corals. At the time, plants and animals with soft tissue were unpopular (first and foremost because they were difficult to preserve) and therefore generally kept as living objects in botanical gardens and menageries. Following the death of Franz I the collection, in which he had invested large sums of money, was passed on to the state, redesigned and made available to the general public twice a week. In 1776 Maria Theresa, who was particularly interested in earth sciences as the basis for mining and manufacturing, brought the renowned mineralogy and mining expert Ignaz von Born to Vienna and entrusted him with the task of systematically developing and expanding the collection. His arrival marked the start of a new age in Austria in which natural sciences and technology were to play a much larger role than before. The “natural sciences cabinet” became the focus of mineralogical research in Europe.

Emperor Franz II (1792-1835), who had a great interest in nature and the natural sciences, added a new “animal cabinet” to the collection. Most of the exhibits for this were hunting trophies which had belonged to Emperor Maximilian II (1564-1576) as well as the famous collection of preserved Austrian vertebrates and insects created by falconer Joseph Natterer. The collection was restructured on several separate occasions before in 1807 a “plant cabinet” was introduced, with the Emperor donating his own plant collection to form its basis. The period around 1800 was characterized by a slightly odd combination of, on the one hand, rather non-scientific exhibitions and, on the other hand, some very forward-looking ideas. Stuffed animals were displayed in dioramas designed to depict them in their natural habitat.

The scholar and organizer Carl Schreibers, who was in charge of the collection from 1806 until 1851, implemented a number of decisive reforms. He developed all the departments into important research centers and was supported in this process not only by members of the museum staff but also by a number of (often highly qualified) volunteers. To mark the occasion of his daughter Leopoldina’s marriage to the Brazilian crown prince Dom Pedro, Emperor Franz sent a group of renowned researchers to South America in 1817. These scientists collected a huge number of items during the expedition and sent many of them back to Vienna. For example, the zoologist Johann Natterer spent a total of 18 years in South America gathering and painstakingly documenting objects of interest for natural scientists and anthropologists alike. These new exhibits played a major role in giving the museum an excellent reputation worldwide, though such was the number of items sent back to the NHM Vienna that for many decades there was an acute shortage of space. A number of temporary solutions – not all of which were successful – were put in place in order to accommodate the many exhibits as well as possible. During the upheaval of the revolution the Imperial Palace (Hofburg) was shot at by imperial troops and parts of the building were set on fire. As a result a section of the collection was destroyed, including a large number of irreplaceable objects that had been sent back from Brazil.

In the years following the revolution the “cabinet” was split up into several individual collections: a zoological collection, a botanical collection, and a mineralogical collection. With their diverse range of exhibits, these collections were not only of great use to researchers but were also very important for teaching and educating young scientists until natural sciences became established at universities in around 1870. The collections were constantly expanded through exchanges, acquisitions, the addition of new exhibits collected by researchers as well as bequests made by travelers interested in natural sciences. Furthermore, cooperation with the Austrian navy – generously supported by the imperial family – was also significant in developing the collections. The circumnavigation of the world carried out by the "Novara" (1857-1859), which saw many outstanding researchers join the crew on board, provided the museum with a wealth of new material which took decades to analyze and document.

This pioneering spirit, typical of the general progressive attitude prevalent in the second half of the 18th century, stood in stark contrast to the increasing shortage of space in the museum buildings. In 1857 Emperor Franz Joseph I ordered the city walls which had surrounded the center of Vienna to be torn down to make way for a major new ring road to be lined with large public buildings, including a number of museums. The liberal middle classes, which at this time enjoyed growing wealth and political importance, wanted to replace the old “cabinets” with centers of education and research open to the people – not least in order to make visible their own cultural rise. On the other hand, the neo-absolutist imperialists who were still clinging on to the slowly crumbling Habsburg monarchy wanted a mighty “imperial forum” similar to those found in Ancient Greece and Rome which was to stretch all the way from the imperial stables to the imperial palace and serve as a monument to the regime. In the end only part of this ambitious plan was realized: the Neue Burg and the Maria-Theresien-Platz square with the Museum of Fine Arts and the Natural History Museum.

On August 10, 1889 the new "k.k. Naturhistorisches Hofmuseum” was opened to the public. Its internal organization was the work of the famous geologist, New Zealand researcher, and first superintendent of the museum, Ferdinand von Hochstetter, whose clear structure still survives in large parts today. However, new spaces and new structures were required as more and more exhibits poured into the collections. To solve this problem an underground storage area with four separate levels was built in 1990 in order to store part of the collection in a climate-controlled environment. A roof conversion carried out between 1991 and 1995 also created new storage and working areas.

The processes of researching, storing, and expanding the collections, as well as displaying selected items, is just as important today as it has been over the centuries – especially at a time when our environment is being destroyed at such an alarming rate. One consequence is that scientists are going into greater detail than ever before. Whereas once a hand-held magnifying glass was state of the art, nowadays researchers have become used to working with x-ray equipment, scanning electron microscopes, electron micro-probes and digital strategies. State of the art techniques are also used when it comes to preserving the collections. During the process of re-designing the exhibition rooms, the original structure was maintained in order to show the enormous diversity of our natural world.
The exhibitions are being adapted step by step to the needs and demands of a 21st century museum, while new areas of focus are presented using modern display technology and teaching techniques. NHM Vienna after the opening 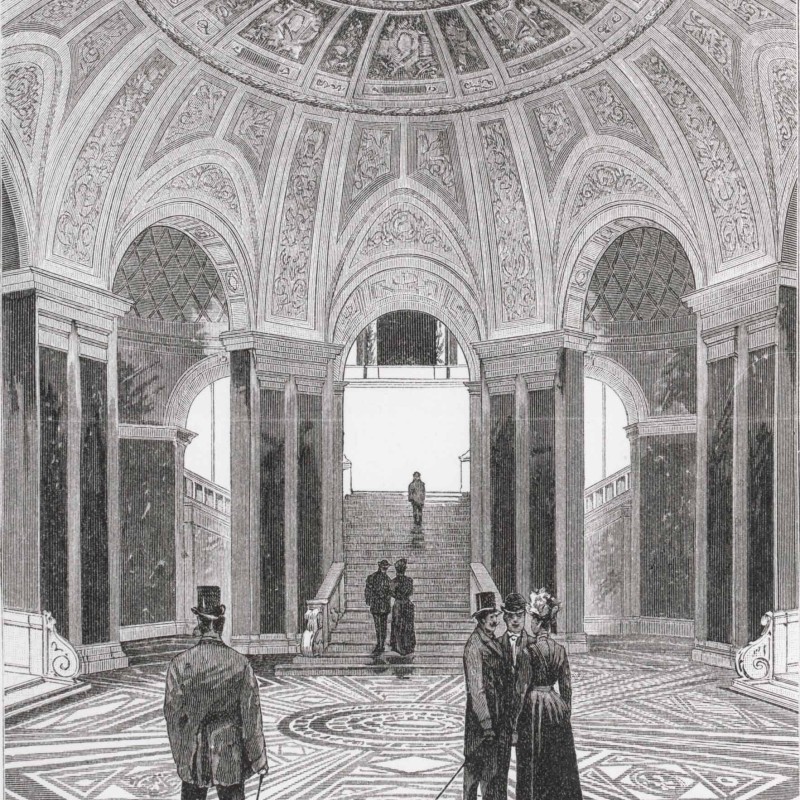