Kingdoms of the iron age

March 19, 2022 - November 27, 2022
At MAMUZ museum of prehistory at Mistelbach
The 8th century was a period of huge change in Central Europe. The advent of iron as a new material marked the end of the Bronze Age and the beginning of the early Iron Age (approximately 750–450 B.C.) saw the emergence of a completely new culture: the Hallstatt culture, named after the significant archaeological site in Upper Austria.

Under the influence of the advanced civilisations of the Mediterranean, religious ideas changed and a new style of art emerged – the many figurative depictions found provide evidence of the belief systems of the time. Leaders who had grown wealthy through trading activities, salt and iron mining, and warfare were buried in splendour under monumental burial mounds. Their tombs still bear witness to their wealth, power and relations with the ancient civilizations of the Mediterranean world. New technologies, new art forms, magnificent vessels and the many surviving objects of a religious nature are typical of this period when the first kingdoms of the Iron Age emerged in Central Europe.

The exhibiton at the MAMUZ is a cooperation with the Natural History Museum Vienna and further partners. 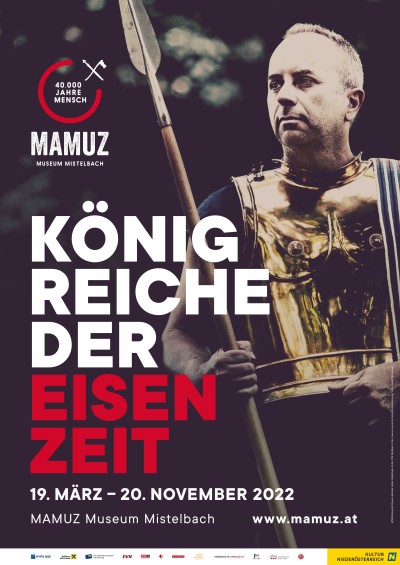 The Cold Eye.
Final Pictures of Jewish Families from the Tarnów Ghetto

May 13, 2022 to November 9, 2022
At the Flossenbürg Concentration Camp Memorial in Flossenbürg, Germany.

A joint exhibition of the Topography of Terror Foundation, the Foundation Memorial to the Murdered Jews of Europe and Natural History Museum Vienna.

In late 1941, two Viennese scholars developed a project “to research typical Eastern European Jews.” The following March, using the “cold eye of science,” they took photographs of more than a hundred Jewish families – 565 men, women and children – in the German-occupied Polish city of Tarnów. Only 26 of these people were able to survive the Holocaust and recount what happened. Pictures and brief biographies of those murdered have been preserved.

This exhibition documents the work carried out by the two scholars while also depicting the lives of Jews in Tarnów before 1939 and their murder under German occupation. This story is typical of how hundreds of Jewish communities were persecuted and destroyed in the parts of Poland under German rule and terror.

Video of the opening and panel discussion at the Topographie of Terror Documentation Center in Berlin, from October 20, 2020.