Animal bones: Insights into the past

Archaeozoological research by the Natural History Museum Vienna investigates domestic animal economy and meat consumption habits of people in Eastern Alpine mining settlements at the boundary from the Bronze Age to the Iron Age (1300 – 450 BCE).
In context with archaeological investigations by the Natural History Museum Vienna and the University of Innsbruck in Schwaz-Brixlegg in Tyrol, animal bones of numerous mining sites from the late Bronze Age to the early Iron Age (1300 – 450 BCE) were investigated. Additionally to research questions concerning prehistoric mining, mining technology and mining economy, the archaeozoological study of the animal bones, which were carried out at the sites of Weißer Schrofen, Rotholz and Bauernzeche, offered important insights into the logistic organisation and resource management of domestic animals at these mining sites. The results were compared and interpreted with other copper and salt mining settlements of the late Bronze Age and Iron Age in the Eastern Alps.

The archaeozoologists Dr. Konstantina Saliari (NHM Wien) and Mag. Dr. Erich Pucher (NHM Wien), in cooperation with the archaeologists Mag. Markus Staudt and Assoc.-Prof. Dr. Gert Goldenberg (both University of Innsbruck) could show, based on the skeletal element distribution, that the economically most important domestic animals were delivered as whole animals. There is also evidence for additional meat packages, especially ribs. According to the age and sex structures obtained from the bone material, the miners consumed meat of high quality. The butchery marks on the bones from the Schwaz-Brixlegg sites point towards professional and systematic slaughter techniques, similar to other prehistoric mining sites in the Eastern Alps. The archaeozoological data show that the investigated mining sites had excellent economic organisation, based on a sustainable balance between miners (consumers) and peasants (producers). Gnawing marks on some pig bones from Weißer Schrofen show, that some dogs must have been exceptionally big for late Bronze Age standards. The functional role of dogs in the context of early mining activities is an exciting topic for future research.

One of the most important archaeozoological results is the remarkable change in the type of meat supply between the late Bronze Age and Iron Age: from pig to cattle (or in some cases small ruminants). During the late Bronze Age (1300 – 750 BCE) pig clearly dominated and was by far the most important meat supplier. Cattle and sheep/goat were rather used for secondary products like milk and wool. These trends are very clear, nevertheless some regional differences existed, which were probably influenced by several factors, including topography, vegetation, altitude and cultural preferences. The remarkable transition from pig to ruminants at the boundary Bronze Age to Iron Age could be related to climatic variations and/or changes in technology. 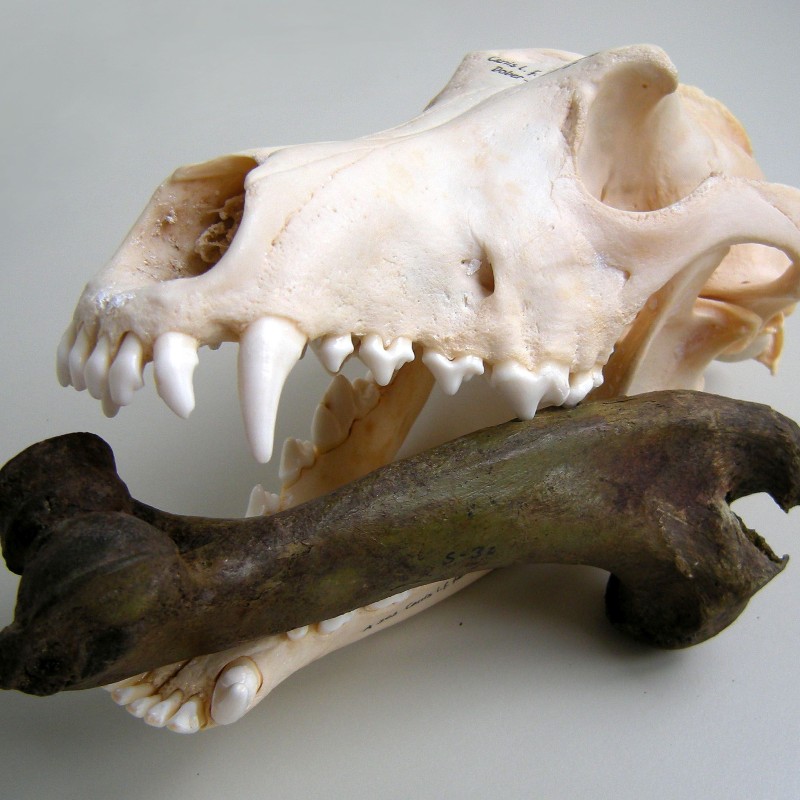 dog skull and pig bone
© NHM Wien
Follow us on