Display of drawings of Australian flora and fauna by one of the great botanical artists.
Australia and Austria celebrate Ferdinand Bauer: ‘nature is revealed, art concealed, great in its precision, gentle in its execution, decisive and satisfying in its appearance’ (Johan Goethe, 1817)

On 26 August 2014, Australian Ambassador David Stuart and Professor Christian Köberl, Director General of the Natural History Museum Vienna (NHM), opened an exhibition at the Natural History Museum Vienna of a selection of Ferdinand Bauer’s illustrations of Australian flora and fauna.  Bauer (1760-1826) is best known as the natural history artist who accompanied Captain Mathew Flinders on the first circumnavigation of Australia from 1801-03.

“Ferdinand Bauer returned to Vienna in August 1814 after a remarkable career in Europe and Australia,” said Ambassador Stuart at the opening. “He represents more than a wonderful artist and fine botanist: he led the way in bringing to Europe an understanding of a significant part of the remarkable biodiversity of the New World.”

The current exhibition draws on the collection of almost 2,000 original illustrations in the NHM. The featured drawings were some of the earliest accurate images to reach Europe of the unique flora and fauna of Australia - not only plants from around the continent but also marine life, mammals and birds.  This is also the first time that so many of Bauer’s drawings held at the NHM are exhibited together at one time.

Bauer returned to England in 1805, accompanied by 11 cases of drawings of over 1,700 Australian plants and over 300 animals.  They are as remarkable today as then for their exceptional fidelity and attention to detail.  Bauer also collected specimens of plants and animals and created a significant herbarium which he brought back from Australia. Upon Bauer’s death in 1826, Emperor Franz I bought most of the drawings and the botanical collection and placed them in the imperial natural cabinet, the predecessor institution of the Natural History Museum.

Ambassador Stuart said that the Ferdinand Bauer collection was one of the most exciting examples of the extensive material collected in Australia in the Imperial period that could now be found in Vienna, not only in its world-leading Natural History Museum but also in the National Library, other collections and the Australian plant collection in the Federal gardens.  Acknowledging existing cooperation between the two countries, including through the international network of national herbarium, he said he was confident that “the legacy of Ferdinand Bauer’s extraordinary scientific and artistic work, together with other holdings of material, will be the basis for increasing such collaboration”.

The exhibition “Ferdinand Bauer – the First Austrian Artist in Australia” is open to the public from 27 August to 28 September 2014. For information see: http://www.nhm-wien.ac.at/en 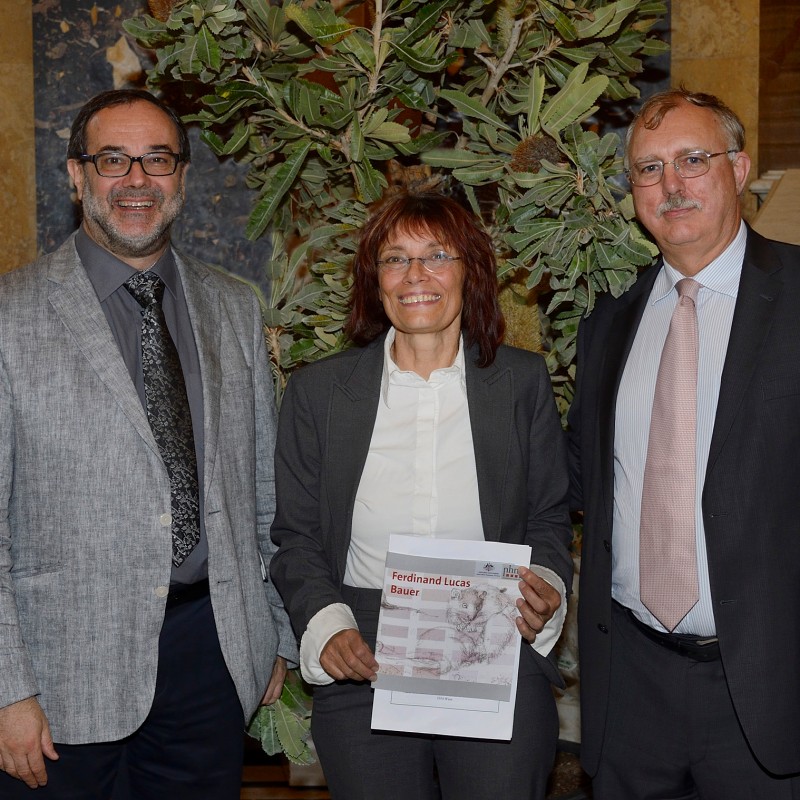