Archaeological evidence of death rituals and belief in the afterlife stretches back to the Old Stone Age. Graves are as diversified and individual as living people: no two of them are ever the same. And yet, the various burial forms reflect a common culture sharing common ideals. This picture of a possible burial ceremony in the High Valley is based on the interpretation of old and new excavation findings, completed by new results from the research into textile, dyeing, leather and costumes and into the population of Iron Age Hallstatt. 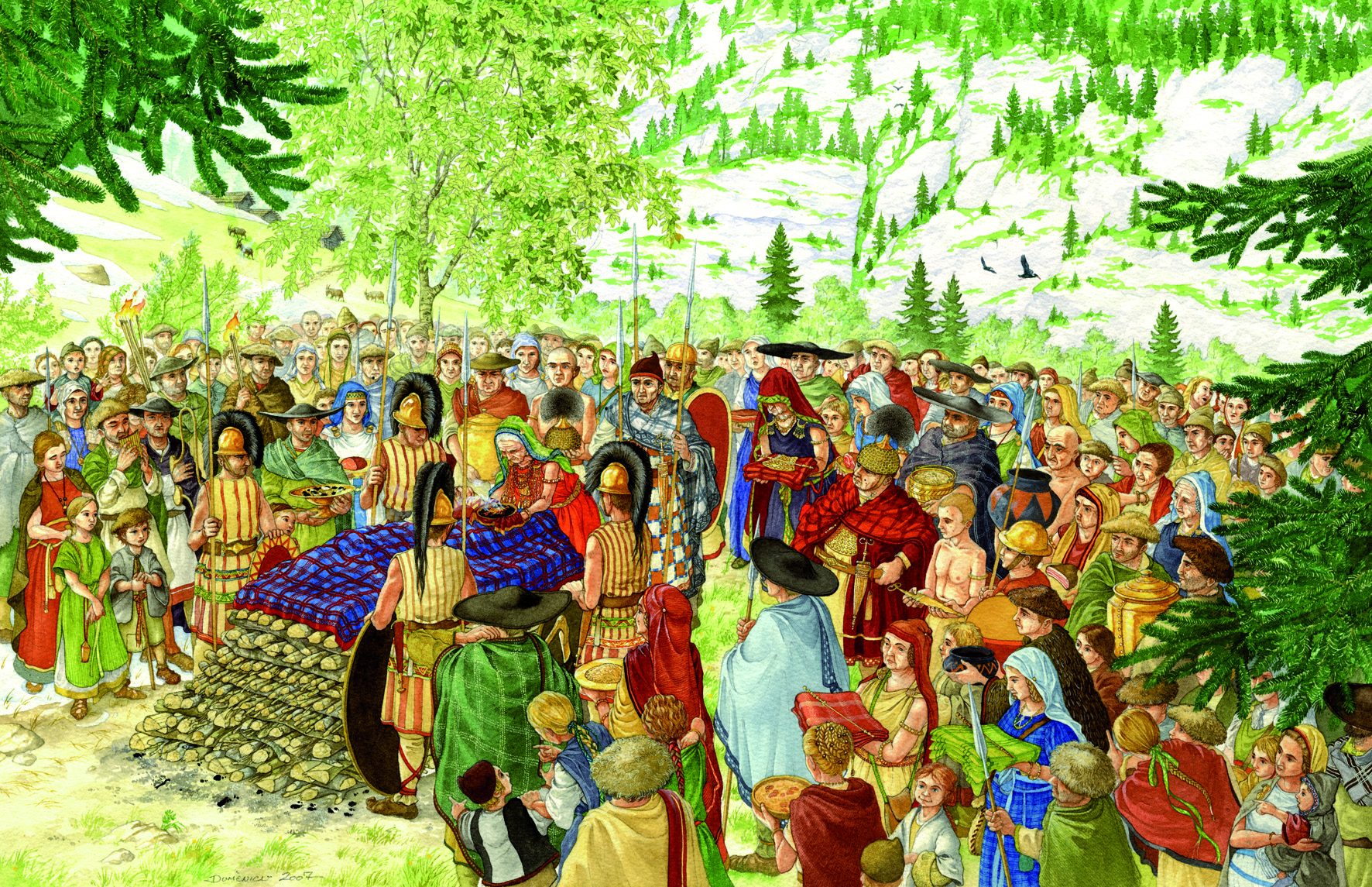 Even today animal bones are still being found at the burial site in Hallstatt. Though no other remains of food and drink have survived, we know from other sites with better preservation conditions that food and drink were common burial gifts in the Hallstatt culture. These were often placed into metal, clay or (in Hallstatt) glass vessels found today through excavations.

Cremations and inhumation took place at the Hallstatt cemetery throughout its period of use, though cremations (in which bodies were burned on a funeral pyre) were less common. It is noticeable that the cremation graves normally contained more burial gifts than those of inhumations. Of these cremation graves, those where the ashes had been scattered rather than placed into an urn generally contained more burial gifts. Some evidence has been found in Hallstatt of a wooden grave construction, similar to a large wooden box, used for scattered-ash graves.

Since 2005 students at the University of Vienna have been carrying out cremation experiments as part of a lecture on experimental archaeology. These have revealed the conditions necessary in order to completely burn a body on a funeral pyre. In 2012 a square pyre comprising dry pieces of oakwood measuring one meter in length was constructed on a stone platform. The area inside was filled with branches and straw. A 60kg pig that had died of natural causes was then burned on the pyre. Within two minutes of being lit with torches, the funeral pyre had developed into a full fire with a maximum temperature of 734.4°C. The pig’s carcass was entirely cremated without the need for extra wood. A total of 922g of cremated bones remained.

The priestly role of women

Little is known about religious beliefs and practices in the Hallstatt Period. Special burial gifts believed to provide protection from evil spirits have been found in women’s graves. This has been interpreted as a sign that women may have had priestly roles. The burial gifts found in Hallstatt include jingle bells. According to researchers, the noise they made would have been used to ward off evil spirits. They have been found on pendants from 800 to 600 BC (HaC) and mainly on fibulas from 600 to 400 BC (HaD).

Belief in the afterlife

The design of graves provides the only information we have on thoughts about the afterlife during the Earlier Iron Age. At the same time, the use of burial gifts is interpreted in many different ways. Some researchers believe that the food, vessels and textiles placed in the graves of the deceased were intended to guarantee their survival in the afterlife, where they could use them very much as they had during their lifetime. This may explain why weapons and tools were used as burial gifts.

Since deceased persons no longer required their bodies in the afterlife (as shown by the use of cremations), these gifts are to be seen as symbolic. However, other researchers believe that the gifts were placed into the grave in order to prevent the dead rising up as zombies – a fear shared by many cultures over the course of history. The theory was that by giving the dead the things that belonged to them and they needed they would not return to earth to claim these items themselves. Some scientists think that burial gifts actually tell us more about the culture of the people living during that period than about their beliefs regarding the afterlife. Such experts are of the opinion that families would have used burial gifts to demonstrate wealth and honor their dead.

Weapons have been found in men’s graves from the entire period of use of the burial site. From 800 to 600 BC they are mostly classic Hallstatt swords made of bronze or iron. The most elaborate among them have sophisticated ivory handles, sometimes adorned with amber inlays. So far, the cemetery has yielded a total of 20 swords, the last of which was found in 1995.

The socalled ‘antenna-hilted daggers’ found in the warrior graves are characteristic of the later phase of the Hallstatt Culture in the cemetery, covering the period between 600 and c. 400 BC (phase Ha D). They suggest changes in the warfare of the time. The prestigious weapons often have magnificent handles, sometimes in the form of very abstract humans’ shapes. The most famous sword from the Hallstatt burial site dates back to the La Tène Period. Found in grave 994, its intricately decorated sheath depicts armed horsemen and fighters on foot. It is one of the very few such surviving depictions of this period.

Bronze, clay and glass vessels have been found in the Hallstatt burial site. It is not possible to know the precise number of pottery items as during earlier excavations archaeologists did not remove the many fragments. When work recommenced at the burial site, experts from the Department of Prehistory developed a new technique in order to find these fragments that had been weakened by the wet soil as quickly and efficiently as possible.

A much smaller number of glass vessels have been found, as during this time glass was not produced in Central Europe. Those found in Hallstatt are among the first glass imports north of the Alps. They probably came from the upper Adriatic region.

Textiles in the graves

Fabrics found their way into the graves of the Hallstatt burial site in many different ways, though few textiles have survived as the conditions at the cemetery are less conducive to preservation than those in the mines. Some textiles were from clothes worn by deceased persons when they were buried. In most cases it is not the textile itself that was found but an impression left on a corroding object, for example on bronze jewelry.

Traces have also been found of textiles used to wrap burial items such as swords. Based on graves in other locations where materials have survived in better condition it is possible that fabrics themselves were placed into the graves as burial objects.

There are surprisingly few graves in which ashes have been placed in an urn. Of 1500 graves, only twelve contain such urns (of the more than 100 graves recently excavated, five contain urns). This is particularly interesting as urns are the main burial form at other sites from this period. The burial gifts in Hallstatt graves containing urns are also less valuable than those found in scattered-ash graves or inhumations.

Other vessels apart from urns may also have been used after cremations. The dispersal of ashes in at least two recently excavated cremation graves without urns indicate that a vessel of organic material may well have been used to hold the ashes but has now decayed.

Jewelry, clothing and weapons found in the graves would have been placed there as burial objects or worn by the deceased when buried. Iron, bronze, amber, gold, glass and ebony jewelry has been found in the graves. Many of the items were intricately made and brought to Hallstatt from distant regions.

Even in the richly adorned graves of Hallstatt, helmets are rare. An excellent example of a double-crested helmet comes from the grave of a man who was not cremated before burial. It was placed next to his head and shows signs of having been repaired.

There are two types of burials in the Hallstatt field grave, inhumation and cremation. Burial gifts were placed into the graves of the deceased. So far no evidence has been found of wooden coffins or similar containers. During cremations the body was burnt before the ashes were either placed in an urn or scattered into the grave containing burial objects. In a few cases it has been shown that the ashes and objects were placed in a wooden construction.

Scholars initially assumed a third type of burial, the so-called partial cremation, which may now be excluded on recent excavation evidence. The rather unprofessional records and sketches prepared credulously by Ramsauer led to misinterpretations and to the development of a theory of the existence of the allegedly unique mixed type of burial, with a partial cremation of parts of the body. In fact, Ramsauer’s documents show the superposition, overlapping and intermingling of different graves.