The scale and technical complexity of the oldest phase of salt mining below ground (around 3500 BC) indicate that even at this early stage there was already a long tradition of salt mining in Hallstatt. Bronze Age salt mining ended around 1245 BC as the result of a debris flow. The finds spanning over 2000 years give a detailed insight into Bronze Age mining but also throw up many new questions for researchers to answer. 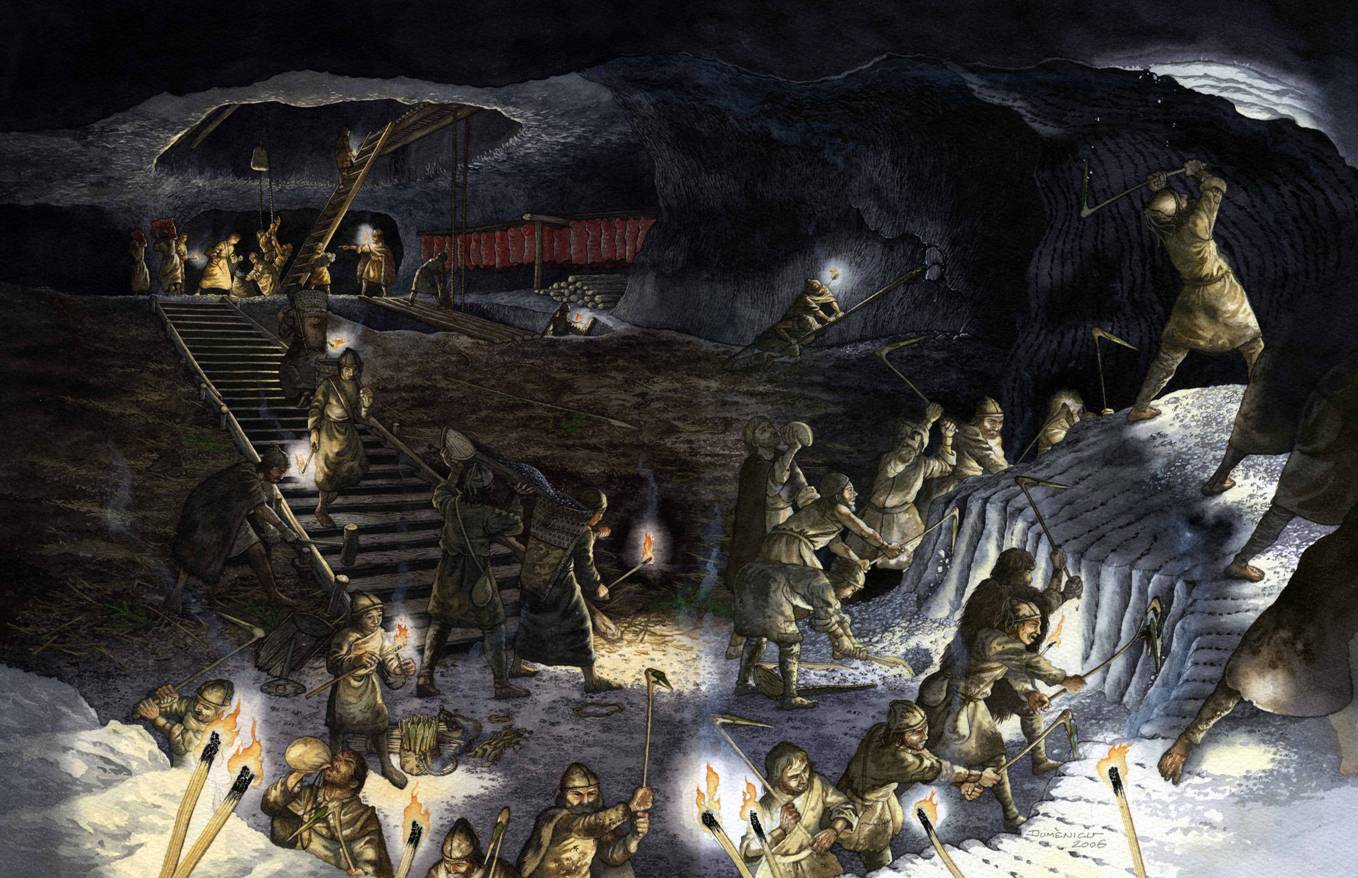 During the Bronze Age the salt was transferred from carrysacks into a woolen sack and then transported up to the surface using ropes. The material most commonly used for bindings in the mine was tree bast, but grass strings are also typically found. Fur and leather straps were rarely used. The break strength of bast fibre ropes is so high that bast was still being extensively used up to a hundred years ago. Strings and ropes of bast were made by twisting in a manner very much like that of hemp ropes (except that the individual fibres themselves were not spun, so it is a filament-, not staple- yarn technique).

Mining timber served a wide range of purposes. One such purpose was to prop up the shafts in order to prevent them from collapsing. It could also be used to build bridges and platforms below ground. Bronze Age mining timber was 5-25cm thick and normally came from fast-growing pine trees. The mining industry required so much timber that it can be assumed that even the Bronze Age population used the principles of sustainable forestry.

Filling-trugs were made from particularly hard-wearing wood. They were most likely used to collect small pieces of rock and salt from the ground and fill them into carrysacks.

Owing to its special construction, this carrysack can easily be emptied by a single movement of the hand, which is both energy and time efficient. Tests with reconstructed carrysacks have shown that the length of the strap must have been precisely adapted to the body size of the person carrying it. Otherwise the entire load would rest on the wooden stick, or the carrysack would hang askew, and the load would then be unevenly distributed.

Some fragments of animal bladders and small wooden plugs have been found in the Bronze Age mines. These were probably receptacles used for drinks.

Scraps of flax, hemp and especially woollen fabric, as well as the pieces of leather and animal-hide clothes were discovered in the Bronze Age mines. It is unlikely that all finds of this kind come from clothing worn underground. Some are probably the remains of more elegant clothing that was no longer needed and found its way into the mine as small pieces of material. Work clothing was most likely made from coarser and more robust materials. Only one item of clothing found has been completely preserved: a cone-shaped hide cap, adorned with leather strips hanging down from the tip. The inner side had the retained fur.

Lighting tapers are held together with a twisted bast binding. Unburnt, the tapers are nearly one metre long. Twisted bast 'torch rings' are among the most common finds in the mine. The Bronze Age tapers were almost always made of fir wood, which is free from resin, unlike spruce and pine. Chemical analysis has not yet provided any evidence of impregnation by combustible substances. They thus contrast with the pine chips from historical times, which are mostly made of wood rich in resin.

Scrapers were used to gather together the pieces of rock and salt on the floor and scrape them into the filling-trug. It was then placed into carrysacks to be transported.

We have a good idea what Bronze Age mining tools looked like. They were single bronze pick ends attached to a bentor knee-hafting. Such mounting was made from an angled piece of oak or beech, with a long, slim shaft and a two-pronged head. Archaeological excavations have uncovered numerous broken haftings discarded in the mountain. Compared to modern tools, the haft, at around 1 metre, is very long and thin.

These bronze picks were used to cut deep parallel grooves into the rock, and the sections between the grooves were then quarried out. Traces of this have been preserved in the Grünerwerk for more than 3,500 years. The technique mainly yielded salt in small chips, while larger tablets of salt could be removed only when natural rock movements and pressures produced clefts and fissures that could be enlarged by pick and crowbarred out.

Large Bronze Age vats for curing meat, primarily pork, have been found in the Salzbergtal valley. Experiments have shown that after being hung underground for six months the mixture of clay, anhydrite and salt gave the cured meat a pleasantly intense taste without the need for any additional spices.

Bronze Age miners wore intricately made headwear such as this hat made from skins and furs. It was reinforced around the edge. The top section is formed of two semi-circular pieces of decorated skin. Only sections of the straps have survived. These would have hung down on each side of the hat.

The surviving remains of Bronze Age mining activity comprise mainly burnt wood chips and broken tools. No salt was left behind in the mines. After the shafts were abandoned, the pressure of the mountain caused the pits to collapse and the hollow spaces underground to close. Mining debris left behind was compacted into the rock. This layer of compacted debris has been referred to by local miners as the “Heidengebirge” since at least the 19th century.

For more than 3,500 years, salt has been mined at Hallstatt. The oldest evidence of salt mining dates back to the 15th century BC, that is to say, the Middle Bronze Age. But those finds presumably do not represent the beginning of mining activities; on the contrary, they reveal fully developed underground mining of considerable proportions. Three different mineshafts were operated simultaneously, reaching a depth of more than 100 metres. The cross-section of a shaft was about the size of a family house.

Hallstatt as a trading hub

Hallstatt produced salt for a huge market. The nearest major suppliers were several hundred kilometres away, in Central and South Germany, so we may assume that Hallstatt salt was traded over long distances as early as the Bronze Age, and that Hallstatt was an important commercial centre.

How far back does this mining activity date? How long did it take to reach these depths, and resolve the technical difficulties? Decades, centuries, or perhaps thousands of years? When did mining actually start in Hallstatt? We have not yet found the answers to these questions. The huge dimensions of the mining site raise more questions, because its operation poses considerable technical, organisational and social challenges. To begin with the technical issue, we must first ask by what technique it became possible to reach the mining depths. But the technical problems are not limited to going into the mountain. The technical challenges increase with increasing depth: ventilation, water drainage, transport of people and material.

How was it possible to deal with the infrastructural and logistical problems of work assignment and work processes, supply – for instance, with wood and bronze – and provisioning the work force with food and clothes? The important finds from the Appoldwerk, the research project in the Grünerwerk, and the current excavations in the Christian von Tuschwerk provide many answers, but raise a lot of new questions. In particular, little is known about the social conditions of Bronze Age mining communities.

The end of Bronze Age mining

So far, the Bronze Age mine have not yielded any wooden item dating any later than 1245 BC. In the Early Iron Age, in the 9th century BC, evidence of mining activities resumes, although in another area. There is thus a gap of some 400 years between the Bronze Age and Iron Age mining.