The Department of Prehistory of the Natural History Museum Vienna has been carrying out research in and around Hallstatt for over 100 years. Supported by Salinen Austria AG and Salzwelten GmbH, which are themselves continuing a century-old tradition of research by local saltworks, the NHM Vienna has held annual excavations in the mines since 1960 and at the burial site since 1992. More recently, research work has been expanded to include new focuses on trade and textiles in and around Hallstatt.

Thanks to the exceptional climatic conditions in the mine, the items found in Hallstatt have revealed a wealth of information giving a unique insight into how prehistoric humans lived and worked in the region. 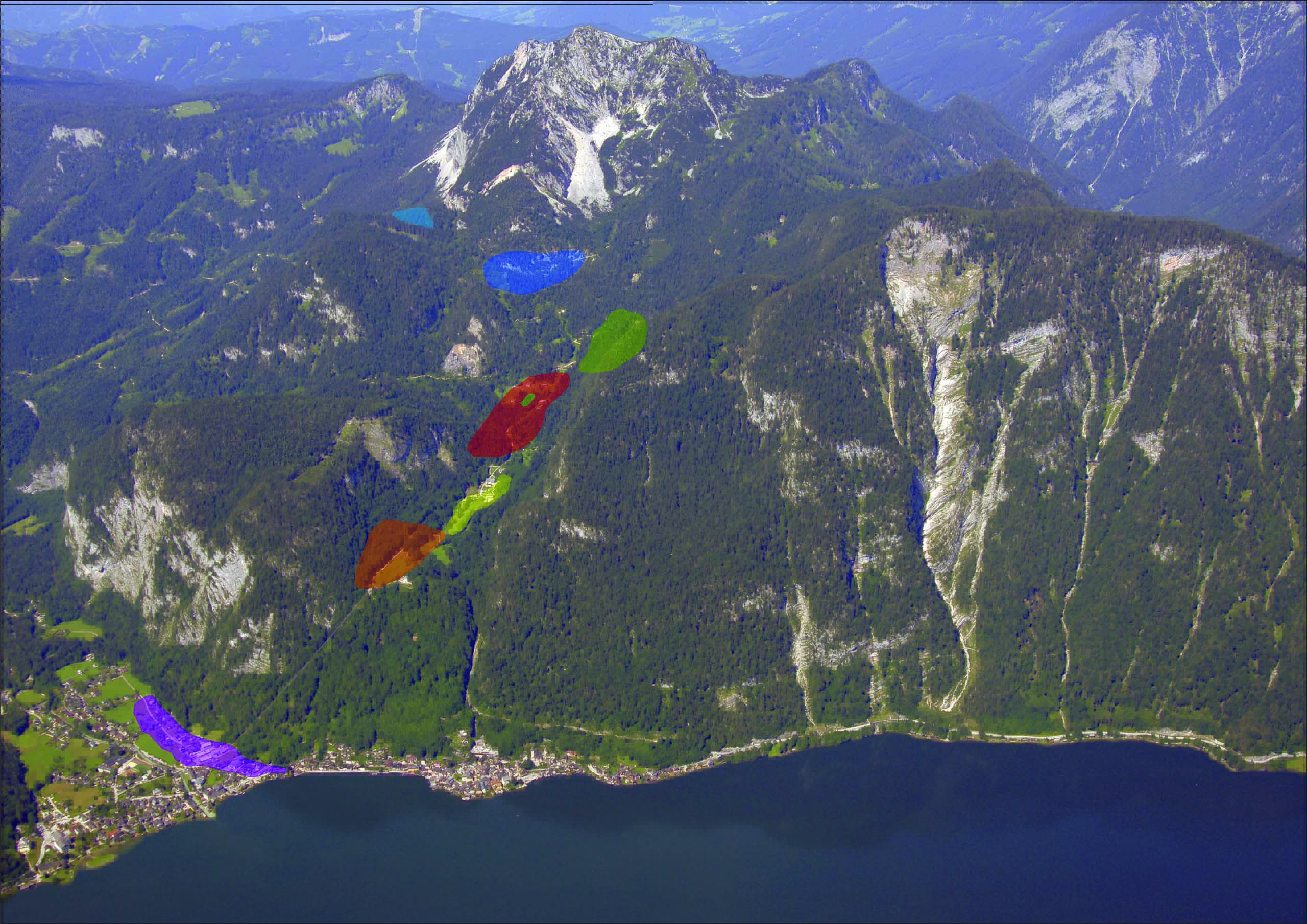 Remains of wooden La Tène Period buildings from the 1st century BC have been preserved in the alpine moorland at the Dammwiese site. This La Tène Period settlement is the oldest prehistoric settlement found so far in Hallstatt. It was discovered during excavation work carried out in the 19th century and the first half of the 20th century. Large drainage systems were created for the wooden residential and farm buildings.

In the 1930s remains of mining activity from the La Tène Period were found at the Dammwiese, a moorland meadow 1357 meters above sea level. Its altitude would have offered protection from landslides even in prehistoric times. Among the most impressive remains is a fully preserved tunnel entrance including remnants of the building that once would have surrounded this access point in the 1st century AD.

The earliest mining activity in Hallstatt can be dated to around 1500 BC, making the salt mines of Hallstatt the oldest in the world. Traces of Bronze Age mining have been found in modern-era pits including the Appoldwerk, the Christian von Tuschwerk and the Grünerwerk.

The climate inside the mines is ideal for preserving organic material such as textiles and wood. Among the many finds are unique examples of technological progress, such as the oldest wooden stairs ever found in Europe. These objects make it possible to reconstruct in detail the mining processes carried out over 3000 years ago.

Many tools from this period show signs of having been repaired. Other items were used for new purposes after they had broken – a sign of efficient resource management. The organic finds from this site, such as textiles and wood, are of particular importance to the research community as material such as this from the Hallstatt Period is rarer than similar material from the preceding Bronze Age.

The people living in Hallstatt during the Bronze Age not only mined salt but also cured meat. Remains of several wooden buildings found at the site provide evidence of this meat-curing industry. Tubs used for curing meat have been carbon-dated to the 13th and 12th century BC. Each would have held between 150 and 200 animals. Bone remains indicate that pigs were the main source of meat and that the animals were slaughtered before being brought into the Salzbergtal valley.

Both its size and the exceptional diversity of the burial gifts found there make the burial site at Hallstatt one of the most important archaeological locations in the world. The valuable items contained in the graves, which date from between 800 and approximately 350 BC, come from across Europe. Therefore, it can be assumed that the residents of Hallstatt had a rich network of contacts with almost the entire known world at the time.

Around 1500 graves have been excavated to date, most in the 19th and early 20th century. Recent excavations carried out since the 1990s have revealed that the people buried at the site engaged in very strenuous physical work, so this burial site with its many valuable gifts must have been used as a final resting place for miners.

In the early 1st century AD a Roman settlement was established on the banks of Hallstaetter See lake, today the site of Hallstatt Lahn. The remains of the residential buildings show that they were constructed using stone, had underfloor heating and were decorated with wall paintings.

In 1983 an emergency excavation discovered a Roman cremation burial site close to the settlement, though these graves were later covered over as the settlement expanded. The stone-box graves at the burial site contained urns and in some cases burial gifts of great value.

Archaeological research work is particularly challenging in the center of Hallstatt, on the narrow shore of Hallstätter See lake. Settlements have existed here since at least the Middle Ages, though it is likely that the first settlers arrived much earlier. As each new wave of settlers arrived, they destroyed traces of previous settlements. Over the course of its long history Hallstatt Markt has again and again been hit by landslides and debris flows. These crush and cover items of archaeological interest and can also leave behind deep craters which have to be filled in with earth – itself containing archaeological finds – from other locations.

Another factor which makes research work in the area so difficult is the fact that Hallstatt today still has many buildings. Therefore, archaeologists have only a few windows of opportunity to gain an insight into the region’s history when construction work has to be carried out on these buildings. In such cases, researchers have to move fast – excavation and construction sites inevitably block access roads which must be reopened as quickly as possible. The sparse, and therefore highly valuable, information gathered so far at Hallstatt Markt has not revealed a homogenous picture of life in the area.

Located in the Salzkammergut region of Upper Austria, Hallstatt has been famous within the international scientific community since the 18th century thanks to its exceptionally rich burial site dating back to the Hallstatt Period. The graves there contain precious items from almost all regions of the world known at the time. Indeed, early researchers were even inspired to name a culture found in many parts of Europe and an entire period of European prehistory (Hallstatt Period) after this location.

Hallstatt’s wealth in prehistoric times was based on seemingly inexhaustible reserves of salt in the mountain. It is likely that this salt has been used by humans for 7000 years. While there is little evidence of surface salt mining during the early period, researchers from the NHM Vienna have been able to establish that in the period around 1500 BC Hallstatt was home to a fully developed salt mining industry. This makes Hallstatt the oldest prehistoric salt mine in the world.

The special climatic conditions in the mine have preserved organic remains that have been found in only two other locations worldwide. Organic objects found include wood, fur, excrement and foodstuffs, which have survived underground for more than 3500 years and today give us an insight into what life was like many millennia ago. Finds from the Hallstatt mines give researchers unique answers about the illiterate people who lived here and their culture.

The landscape around Hallstatt

The reason people settled in this region is because of the abundant salt deposits in the valley high above the lake. When you arrive in the high hanging valley by funicular railway, ascending approximately 300 metres in just a few minutes, you can hardly imagine how difficult the journey once was. Flanked north and south by steep crags, closed to the west by the vast limestone massif of the Plassen, and cut off eastward by a steep descent to the lake, the original access to the valley was via demanding and sometimes treacherous bridleways. Even the broad route way, established over the Hallberg in the middle of the 19th century, still involves twelve hairpin bends and several bridges to reach its destination.

The salt store in Hallstatt

This makes the wealth of archaeological finds from in and around Hallstatt, and in particular from the High Valley, all the more remarkable. In prehistoric times, it was undoubtedly salt that exerted a strong pull, with saline sources probably attracting animals in the first instance, to be followed by humans. Several stone axes discovered in the region support the idea that the High Valley (the Salzbergtal) has been occupied by humans more or less continuously since the beginning of the Neolithic period or later Stone Age, some 7000 years ago. A pick made of deer antler, a typical mining tool of the time, suggests that there had at least been attempts to extract salt through mining. The systematic mining of the deposits seems to have begun during the Middle Bronze Age, from the 16th century BC onward. Since the late 18th century AD, miners have repeatedly uncovered logbuilt constructions in the area above the village of Hallstatt, but it was not until recently that the structures were recognized as buildings dating from the Early Bronze Age.

The drifts and leaching chambers of the historical mine, mentioned for the first time in a document of AD 1311, have provided much archaeological evidence, demonstrating that the miners of the Middle Ages were by no means the first to pursue activities deep under the earth's surface. We have evidence of three prehistoric salt mines in the High Valley: one dating back to the Bronze Age, one to the Early Iron Age, and one to the Late Iron Age.

As well as the salt mines, Hallstatt is also home to one of the most important prehistoric cemeteries ever found in Europe. It was this burial site, located in the high valley, which caused researchers to coin a culture and period of prehistory and early history the Hallstatt Period. Back in the 19th century early researchers were able to excavate over 1000 graves containing magnificent burial gifts indicating close trade links between prehistoric Hallstatt and almost the entire known world at the time.

Finally, the prehistoric features that we can associate with house building, discovered on the Dammwiese site, seem to represent a mining settlement associated with the most recent period of ancient mining during, the Late Iron Age. Below the hanging valley, down by the lake, the remains of substantial Roman villas have been found, and signal the replacement of the Celtic salt miners by a foreign imperial power. On the basis of this wealth of remains, the Hallstatt region must be counted among the preeminent archaeological sites not only of Europe, but of the world.