Mining in the Hallstatt Period

It was during the Early Iron Age, also known as the “Hallstatt Period”, that mining activity in Hallstatt reached its peak. Salt winning brought the mining community lasting wealth, mainly evidenced in the worldfamous cemetery. However, the undocumented gap of around 300 years between the end of Bronze Age mining and the start of mining in the Hallstatt Period proves that there is still much research to be done in large sections of the mines. The Hallstatt Period brought with it new mining strategies and technologies not used in the Bronze Age. 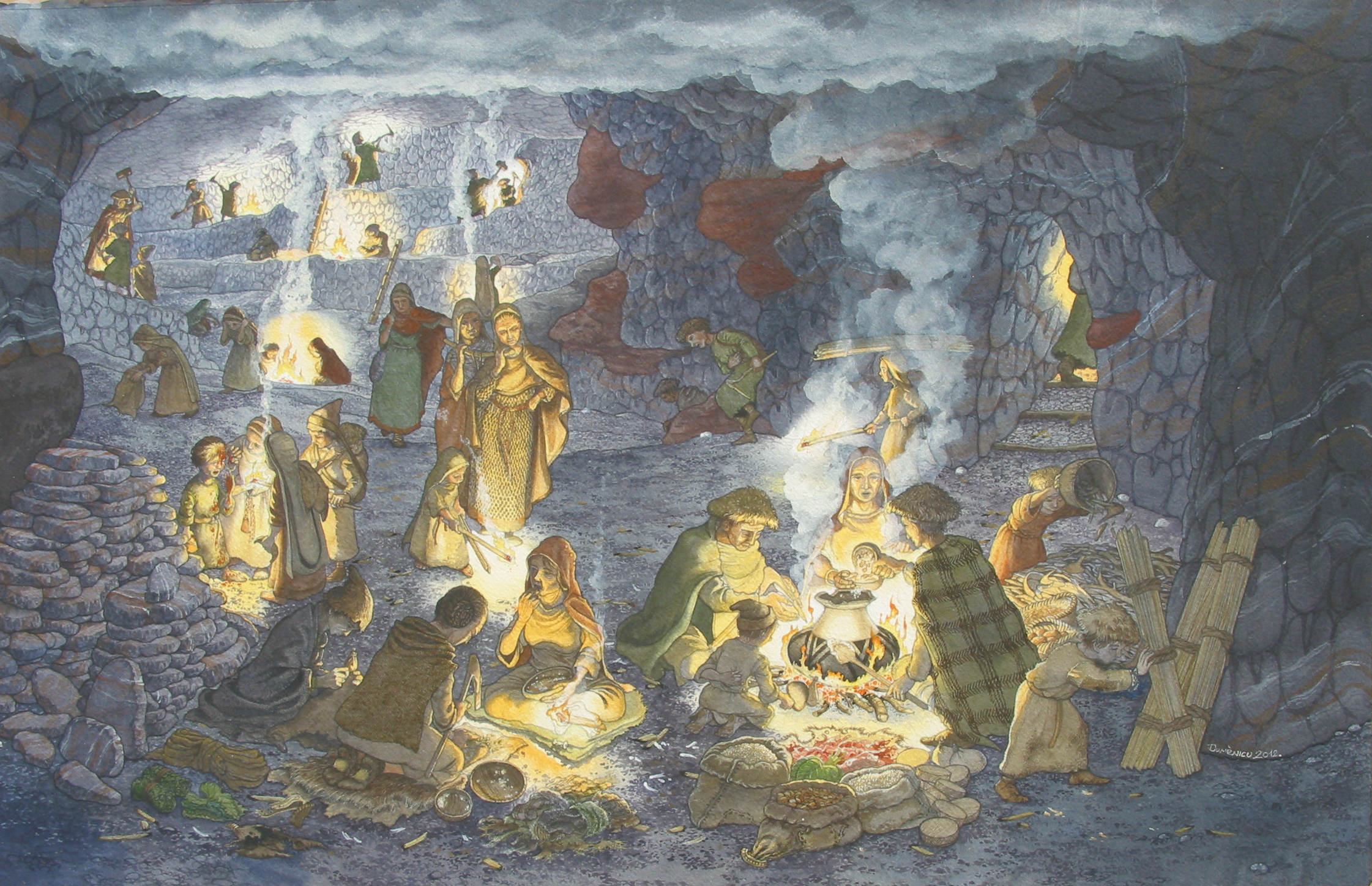 A number of climbing trees have been found in the Iron Age mine. These would have been used by the miners to climb large distances quickly. They are made of tree trunks with the bark removed; grooves cut into the sides of the trunks served as foot holds. Climbing trees are easier to handle and more stable than ladders. Unlike stairs, which could be used by several people at the same time and formed important connections between the different areas of the mine, climbing trees were probably used at the rock face in order to be able to mine sections of rock at different heights.

Children in the mines

Examinations of children’s skeletons found at the Hallstatt burial site show that they too carried out heavy physical work. Signs of extreme physical exertion have been identified in the skeletons of children aged eight years and older. However, it takes a significant period of time for such physical changes to occur in the body, so it can be assumed that children of a much younger age worked in the mines.

It is possible that the youngest children were responsible for making sure the wood chips were burning to provide light in the mines. These wood chips would have had to have been turned frequently in order for them to burn evenly. From the age of five years children would have been given the physically strenuous task of transporting salt and rock. A baby’s hat dating back to the Hallstatt Period indicates that even children of a very young age probably also spent time in the mines.

Almost half of all the broken pick handles dating back to the Hallstatt Period contain marks indicating they were used for scraping. This scraping movement must have been carried out very often. Though it is still unclear precisely what these tools were used for, research indicates that it is unlikely to have been to shape timber, cut meat or split logs to provide wood chips for burning.

Food in the mine

Remains of food and cooking utensils show that miners also ate underground. Wooden dishes found in the mine probably served as plates. The inside of these dishes are often scratched, indicating that the miners probably scraped the dishes with their fingers when eating.

Ritschert – staple food of the miners

Tests on food remains and excrement found in the mine have revealed that the miners’ main food was Ritschert, a porridge mixture containing barley, millet, broad beans and low-quality meat with a lot of rind. A similar dish of the same name is still served today in many regions of the Eastern Alps. Researchers have still not been able to determine the exact ingredients contained in prehistoric Ritschert. Scratches on the inside of the wooden dishes used by miners indicate that it was probably quite thick. It is likely that it was cooked over a fire in the pit using a vessel with a cone-shaped neck.

Large pieces of wood charcoal indicate that large fires were lit in the mines. These would have provided light and been used to cook food. Moreover, by warming the air below ground they would have stimulated the natural flow of fresh air into the mine.

Excrement found in the mine shows that during the Hallstatt Period miners ate predominantly vegetable matter. Analyses have shown that the excrement contains millet, emmer wheat, barley, broad beans, single-corn wheat, proso millet, foxtail millet, field beans and a range of fruits. Small boxes with remains of casein, the main component of cheese, have also been found as well as hazelnut shells.

There are several different ways that textiles from the Hallstatt Period came to be in the mines. Some may have come from work clothing worn by the miners during their shifts. Others, however, are too intricate for work clothing. It is likely that these were worn above ground and, once they were no longer needed, torn into strips and sent down into the mines. There they could have been used for cleaning, storage, sieving and many other purposes. Textiles from the Hallstatt Period are of particular interest to researchers as there were only few settlements built in areas of moorland during this time. With burial habits also changing throughout Europe during this period, there are fewer finds of organic material from the Hallstatt Period than from the periods before. Comparing the very well-preserved finds from the Hallstatt mines with the less well-preserved finds from nearby the burial site makes it possible to draw important conclusions.

During the Hallstatt Period a combination of fires, reflective stones and burning lighting tapers were used to provide light underground. The lighting tapers used were different in both design and material from those employed during the Bronze Age. The spruce and fir wood tapers are now thin in section, but up to 5 cm wide. They are found in large numbers, but always burnt down, so that their original length has not been established yet. No mountings for the tapers have been discovered so far. They may have been held and minded by children.

Although well aware of iron and its uses, the miners in Hallstatt continued to use bronze picks during the Stone Age. This tool’s beechwood handle had a clubbed head and a short, thick stem. It was clearly tapered in the top third. This feature not only protected the valuable metal tip, but also reduced wrist contusion.

The special alloy used for the pick has a higher percentage of tin (10% or more) than was commonly used at the time, which makes the pick considerably harder, but also quite brittle. As a consequence, the tips of the picks broke off fairly often.The consequence of this was that the top of the pick often broke off and had to be replaced.

Several shoes have been found in the mine. Four of the six shoes found correspond to European sizes 31/32 and 34/35 (US sizes 13/13.5 and 2/3), so it was likely that they were worn by children or small women. Wear on the shoes is particularly apparent around the foot arches, which is consistent with the action of climbing ladders and steps.

Textiles from the mine in Hallstatt have been found to contain the hard-wearing shells of body lice eggs (nits). As well as causing itching, body lice can transmit a number of infectious diseases.

Examinations of female skeletons from the Hallstatt Period burial site have revealed that they often carried heavy loads on one shoulder. There are two possible explanations for this –either women carried the loads alone using a shoulder strap, or two women transported the salt together using a wooden pole carried on their shoulders. However, only few wooden poles and straps made of leather or fur have been found which could have been used for this purpose.

Excrement has been found in almost all areas of the Hallstatt mines, indicating that there was probably no specific place where miners could relieve themselves. Very little excrement from the preceding Bronze Age has been found. This pattern holds true for food remains, so it is likely that the areas of mining activity and the waste disposal strategies used in the mine changed over the course of time. Feces from the Hallstatt Period contain intestinal parasites which would have caused unpleasant symptoms such as stomach pain, colic, diarrhea and constipation.

The Early Iron Age, the Hallstatt Culture, was the golden age of salt production in Hallstatt. The salt brought incredible wealth to Hallstatt and changed this remote location into a prominent commercial centre. The world-famous cemetery in the High Valley has yielded luxury goods from all over Europe. We do not know how they came to Hallstatt, or whether they were directly exchanged for salt. There is however no doubt about the direct relation of these objects to salt mining.

Archaeological finds from mining activity during the Hallstatt Period

According to current research, the Bronze Age mine collapsed in the 13th century BC, and new mining activities are only evidenced some 300 years later and in completely different locations. This is now Iron Age salt mining. The findspots relating to these mining activities are scattered over a surface extending over some 54,000 m2. The Hallstatt miners reached a depth of 200 m. Following the classification suggested by Othmar Schauberger, this mining area is now termed the ‘East Group’.

But what happened in the centuries between the end of the Bronze Age mining and the beginning of the Hallstatt Culture salt mine? Had the great catastrophe of the 13th century BC made people abandon salt working? And if so, how can we explain the highly developed and perfectly organised mining that seems to emerge abruptly about 900 BC? Perhaps mining did not stop in the 13th century BC after all, but was transferred to another place that has not yet been discovered or so far identified as such: that would be where the form of mining today known as Hallstatt Culture mining developed. The fact that it has not been discovered so far is not as surprising as it may seem. Only those areas of the High Valley where modern mining occurs can provide information about prehistoric sites, and there are still large parts of the mountain that have not been penetrated in historic times.

Early Iron Age mining is characterized by completely new strategies and technologies, and we can scarcely discern any connections with the Bronze Age. The Bronze Age shaft building strategies were not utilized. In the Bronze Age, shafts were driven vertically down the mountain in search of the rich bands of salt. Now, however, the miners cut horizontal adits to follow the course of the salt veins. The pattern of Hallstatt Culture mining appears highly regulated. It seems that the deposit was opened up and an extensive infrastructure erected within just a few decades. Salt winning seems to have been started at the same time. The mine galleries were now of huge dimensions. In order to hollow out the high mining halls, it is likely that the miners gradually worked their way up step by step. No platforms, which would indicate a different form of mining, have so far been found and we do not know if these mining levels were cut-in longitudinally or transversely.

The end of mining in the Hallstatt Period

Around the middle of the 4th century BC, the flourishing salt mining came to a sudden end. What had happened? Nearly all known findspots look the same: the mining chambers are backfilled with several metres of fine-grained surface material containing stones and rocks of various sizes. The traces on the surface are equally telling. In some places, the original surface is covered by a layer of debris and soil sometimes as much as eight metres deep. Mass movements such as earth flows and debris flows are a common occurrence in the region, even in modern times, occurring for instance on the Sandling near Altaussee in 1920.