The beginning of everything. About galaxies, quarks and collisions

The exhibition is a collaboration between the NHM Vienna and the Institute of High Energy Physics (HEPHY) of the Austrian Academy of Sciences.

What does the universe consist of? Where does the universe end? How many dimensions are there in the universe? What is the universe expanding into? These and similar questions have bothered humans for centuries and still bring us to the limits not only of our knowledge but also of our imagination. "The beginning of everything" presents answers to at least part of these questions by taking visitors for a journey more than 13 billion years back into the past, to the start of the universe, and by communicating most recent scientific knowledge of particle physics and cosmology in a readily comprehensible manner. In addition, artists offer a contrasting approach to this complex topic from different visual, optical and acoustic angles and perspectives.

The first section refers to the observable universe, with impressive images of our solar system and spectacular pictures of stars and galaxies taken by the Hubble Space telescope.  The life cycle of a star is documented, and meteorites lead to the question “How did life on Earth get started?”

The second part of the exhibition focuses on the first 380,000 years after the Big Bang. Supersymmetry, the Higgs particle as well as the dominance of dark matter in the universe are presented, a moment before quarks and gluons formed protons and neutrons.

In the exhibition, these invisible, incredibly tiny particles figuratively seem to gain in substance as visitors are invited to give rise to new quarks and play soccer with protons.

The very early universe is the subject of intensive research. The crucial question, however, the question about the instant of the Big Bang itself, is still unanswered. Scientists think they can pick up the story after a few fractions of a second, but the very beginning of the universe remains pretty hazy.

The third part of the exhibtion is devoted to CERN (European Organization for Nuclear Research) where physicists and engineers are probing the fundamental structure of the universe and bring its earlierst moments into sharper and sharper focus. Visitors learn about the most recent scientific findings and get to know the world’s largest and most complex scientific instruments like particle accelerators and particle detectors.
Just as we do not know how the universe exactly started, we also do not know how exactly it will end. Therefore, visitors are given the chance to create their favourite possible scenario for the end of the universe themselves, by choosing between Big Crunch, Big Rip, or Big Freeze.

Video, light and sound installations created by Austrian artists offer a completely different approach to the infinity of the universe and the gigantic dimensions of spacetime. Several pieces of art created by a scientist working at CERN as well as by an artist in residence at CERN have been inspired by the CMS experiment, thus representing a direct link between science and art.


Expansion of the Universe (25. Mai bis 20. August 2017):
Die Geschichte des Universums als Klanginstallation
Wakolbinger’s work depicts the evolution of our universe through the medium of sound. It is based on recordings of microwaves from outer space.
For further information click here.

Artits of the exhibition:

- Barbara Imhof/ Damjan Minovski/ Eva Schlegel: "Cosmic Mist". For this exhibition, artist Eva Schlegel, architect Damjan Minovski and space architect and researcher Barbara Imhof created a room installation making visible that which often remains invisible to the human eye.
- Manfred Wakolbinger: "Galaxies". In the sea off the coast of Sulawesi, Manfred Wakolbinger dives down into the waters at night. Initially he sees nothing more than plankton and impenetrable darkness. Then, suddenly, a shimmering body of light appears – like a galaxy. Photographs taken during these dives form the basis for the films Galaxies 1-4.
- Brigitte Kowanz: " Dateline zero for space and time". Brigitte Kowanz examines the Big Bang as a complex stretching of space and time. Mirrors, two-way mirrors as well as neon, argon and xenon lights combine to form a world of virtual infinity opening itself up to visitors.
- Hofstetter Kurt: Hofstetter Kurt’s lenticular object "Susys Fingerprint" visualizes the theory of supersymmetry using the technique of inductive rotation. By repeatedly applying this rule to a square shape comprising four elementary particles, sample planes are created. His sound installation Myon D links the chirping of crickets with the discovery of muons: each time a muon is discovered, the slowed down sound of a cricket chirping can be heard.
- Michael Hoch: "The GodParticleHuntingMachine". Michael Hoch, an Austrian artist and physicist at CERN, showcases the CMS experiment in his photo collage and focuses not only on the technology behind the machine but also its aesthetic beauty.
- Chris Henschke: "Nature of the Apparatus". A video of the Large Hadron Colliders (LHC) is manipulated using algorithms so that the sounds generated by the accelerator beam and the detector dictate the progress of the film itself.


With kind support of 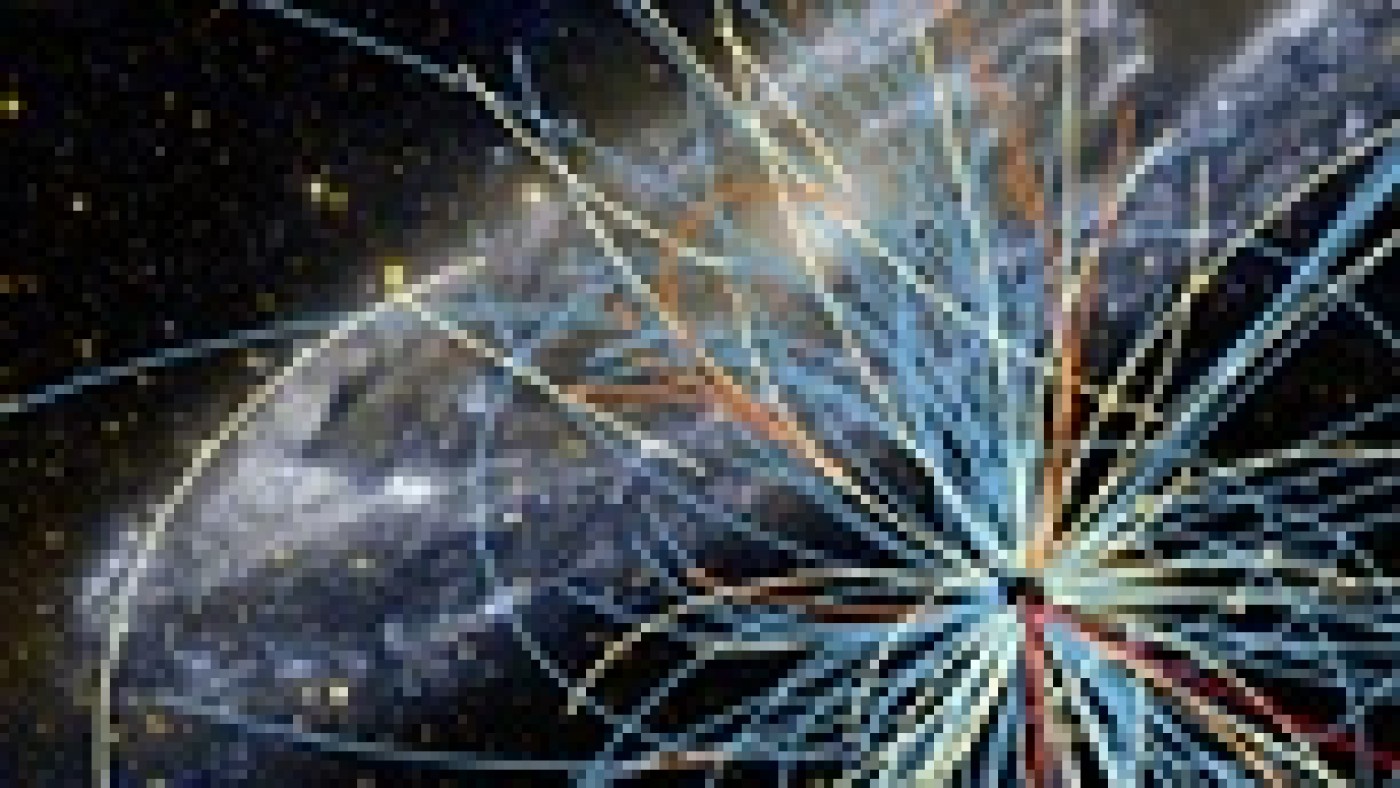