As a result, all aspects of visual art – architecture, sculpture, painting – were used for the Natural History Museum, which also incorporates style elements from many past periods, in particular the Renaissance. Work began on the building in 1871 and the facade was finished in 1881. It is around 170 meters long and 70 meters wide, comprising two courtyards that are each surrounded by working and exhibition rooms. The roof is crowned with a 65 m dome bearing a huge bronze statue of the Greek sun god Helios, a symbol of the life-giving element without which nature would not exist. The upper and middle levels (mezzanine and first floor) of the intricately decorated facade display allegorical and mythological figures representing key elements of the universe and its discovery and understanding by man. On the balustrade visitors can see sculptures of famous researchers and scientists who represent the continuing progress of human knowledge. These fundamental ideas are also the basis for the sculptures and paintings in the Dome Hall and the grand staircase; the highlight here is Hans Canon’s ceiling fresco “The Circle of Life”.

The internal structure of the building is dictated by the systematic organization of the exhibition and the individual departments. The mezzanine covers inanimate nature (Department of Mineralogy, Halls 1 – 5), sediments and traces of life early in Earth’s history (Department of Geology & Paleontology, Halls 6 – 10), early human history (Department of Prehistory, Halls 11 – 13) and human development (Department of Anthropology, Halls 14 – 15).  The first floor presents the huge diversity of the animal world (Zoological Departments, Halls 22 – 39) as well as the fascinating realm of the Earth’s smallest organisms ("Microtheater", Hall 21). The exhibits themselves are displayed in a systematic order according to how closely they are related to each other or their chronological position in the history of Planet Earth or the human race.

Following Semper’s death in 1879, the museum building was completed by Hasenauer, who was able to implement many of his own ideas in the interior design. However, even inside the museum there are still many examples of Semper’s signature style such as the wall paintings in the exhibition rooms. Completed by the most important Austrian landscape painters of the time, they not only serve a decorative purpose but are also a key part of the architecture and are designed to enhance and emphasize the objects on display. However, today some elements of this concept, such as the illustrations of ethnological exhibits in Halls 14 to 19, are outdated and no longer reflect the modern-day organization of the museum.  Ethnology, which was previously combined with prehistory and anthropology to form one single department, became a separate department in 1927 when it moved to the Neue Burg. It was made a museum in its own right in 1946; today the “Weltmuseum Wien”, formerly “Museum für Völkerkunde”, is affiliated to the Museum of Fine Arts.
Download all images 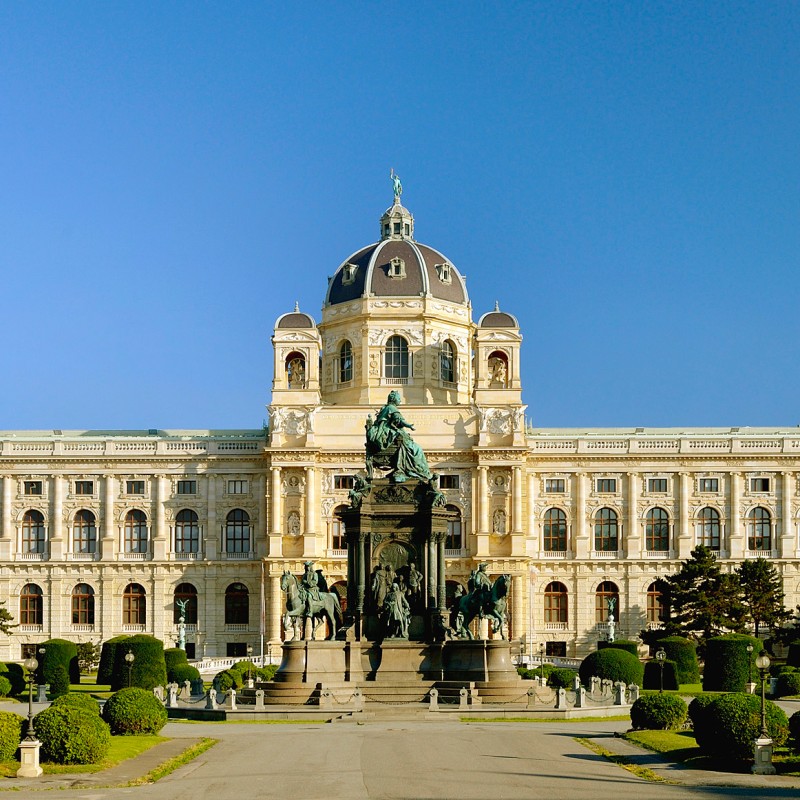 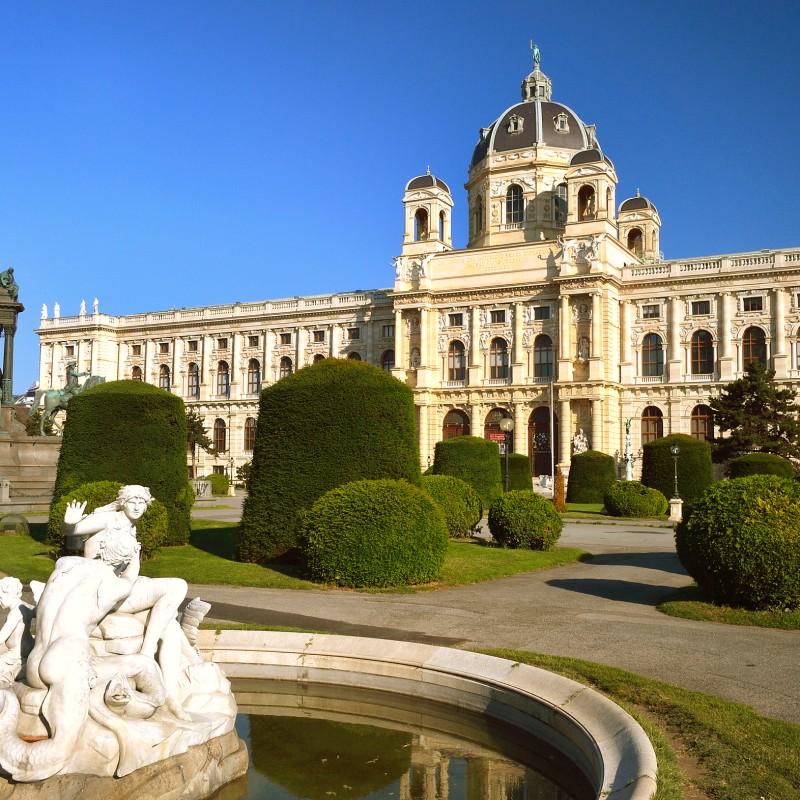 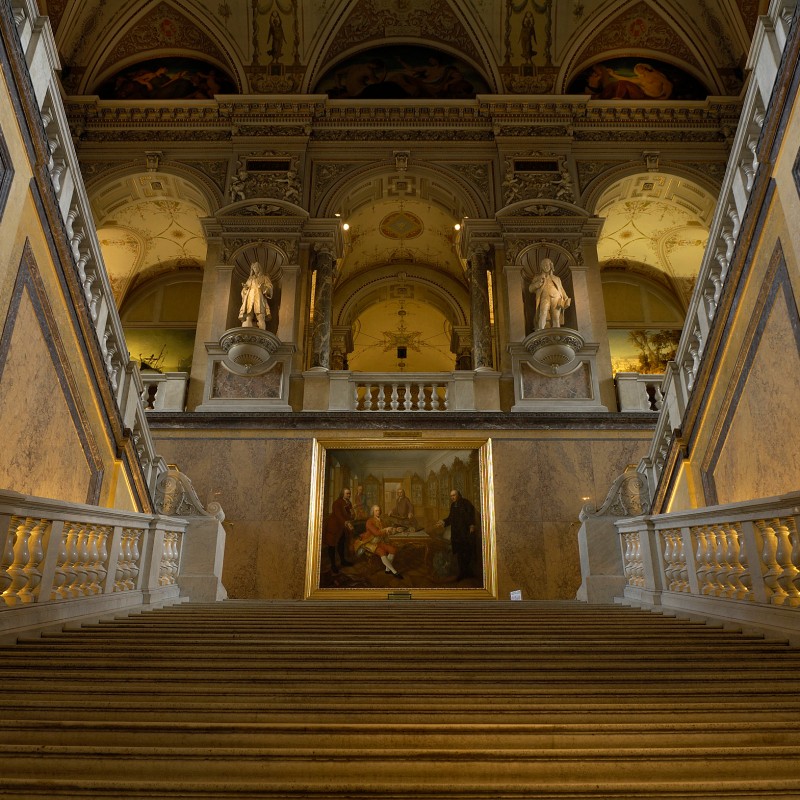 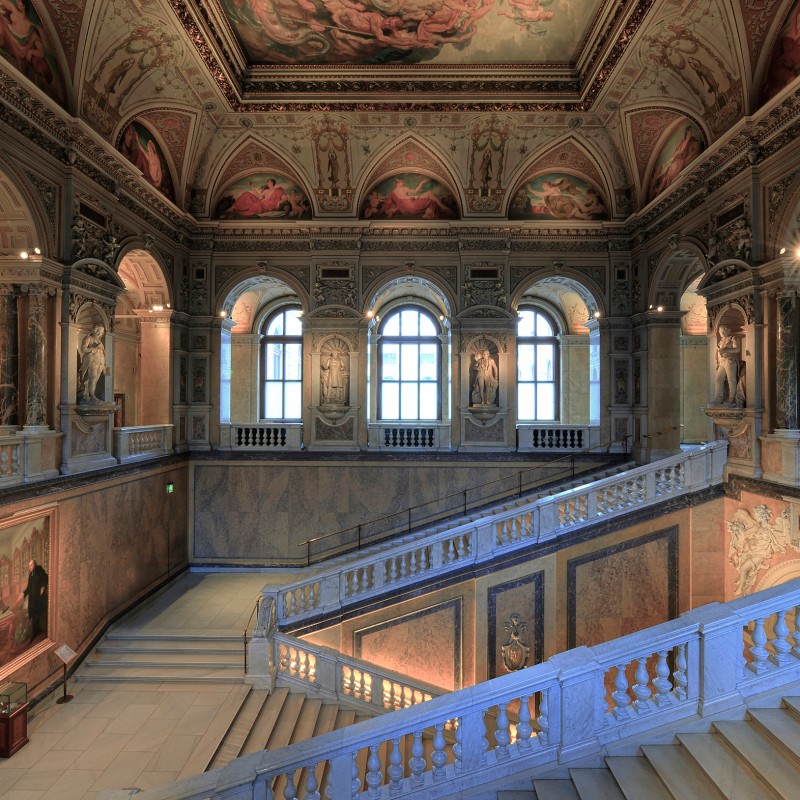 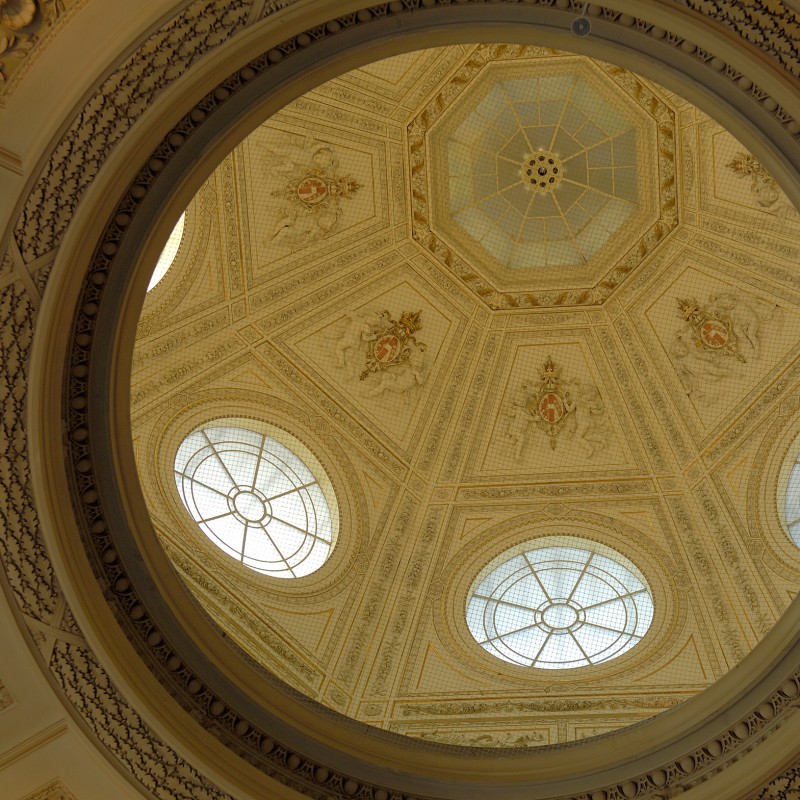